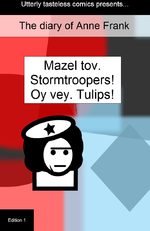 The comic book will introduce a new generation to the wonders of genocide.

AMSTERDAM -- Plans are underway to publish the Diary of Anne Frank as a comic book.

The Anne Frank Museum here is undertaking the task. Spokeswoman Annemarie Bekker said the museum hopes to make the story of Jews persecuted during World War II more accessible to teenagers, such as those who emerge from American public education groggy from Ritalin and unable to read, but still marginally able to look at pictures.

Casting serious historical topics in a light-hearted format is not new. The long-running television series Hogan's Heroes turned the Allies' prisoner-of-war experience into a hilarious situation comedy. The movie Major League demonstrated how comics can introduce the Classics even to dumb baseball players, provided there is sex riding on the outcome.

Ms. Bekker left open the possibility that characters from such prior works might be adapted to the new Anne Frank comic book. For example, Sargent Schultz could bumble his way to herding Jews into crowded rail cars for the trip to concentration camps. However, his notorious penchant for being bribed with food might be problematic in this setting, as it is hard to imagine anyone being bought off with Matzoh balls or knishes.

The persecuted Jews might themselves be represented symbolically. In the path-breaking full-length cartoon Fritz the Cat, urban Negroes were portrayed as crows, a device that always got laughs from self-deprecating black moviegoers. A slapstick competition between bumbling Germans and klutzy Jews portrayed as animals might make the Holocaust story a laugh riot for new generations.