“I find your lack of faith in matzah disturbing.”

Matzah was invented by the Jews after escaping from Egypt because they decided as a community that they did not have enough stuff to complain about. Many historians dispute the validity of this statement, but evidence was provided by a man who was "totally there and saw, like, everything." This has been enough to quiet most historians, but some still remain unconvinced. But they are wrong.

A piece of the dreaded matzah, which looks surprisingly like crappy Braille. Coincidence? You decide.

"Matzah" has no etymology, so to speak. The origin of the word is that "matzah" was the noise Moses made when he was spitting out his first matzah. The "significance" of matzah was also made up when the prophet said "Dear Lord, this stuff tastes like slavery!"

Matzah is also used nowadays to describe any white criminal. This is a direct relation to the term "cracker", but there is a difference.

Example: "Bill Gates is a cracker, but Ted Bundy is totally matzah."

Since the Jews had just been freed from slavery by a kind and loving God, their spirits were high. Too high. And when God gave the Hebrews that $100 coupon to Bed, Bath, and Beyond, it only made them happier. This, ironically, upset the Jews, known to enjoy taking any situation and making it seem like it totally sucked. The Jews therefore needed something new, something original which they could complain about.

Their first idea was to make their kids listen to their music too loud. However, the Jews suddenly realized that radio would not exist for several millenia, and this put a damper on that plan. Then they considered taking Moses and crucifying him. They eventually came to feel that that would be too extreme, and no one would listen to people bitch about one guy being crucified for more than ten years or so. In retrospect, that plan totally backfired a couple thousand years later. Ironically, this gave the Jews something else to bitch about.

Then, the brilliant idea arose. It is not known exactly when the idea of poorly baking bread first came up, but no doubt it was first ridiculed as stupid and trivial. The poor guy's friends probably called him "Pillsbury Dough-with-no-yeast-boy" and pushed him in the sand. He then wrote a memoir about it and received the equivalent of $3 million. However, since all his payments were made in the form of tickets to the Vagina Monologues, he killed himself and died in a state of both poverty and extreme education in the inner workings of a woman's private parts.

But the man's idea for a disgustingly tasteless and flat bread soon spread like wildfire. Not only that, but it also spread very quickly and very far. The Jews realized that, though petty, they could bitch about this for at least a couple thousand years, which they would need to do until Hitler came around. Moses tried the stuff, and that was that. Matzah was thus given its crappy place in Jewish history. 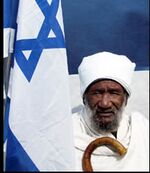 One of the little-known side effects of matzah is a mistaken African identity.

Besides its use as an object of complaint, matzah is also:

Occasionally mistaken for a communion wafer. (If matzah really were "the body of Christ", then the taste alone provides the best case ever against cannibalism.)

Additionally, matzah runs pretty expensive, so it is a great way to give the Jewish economy a jump start. This is very useful, because it is well-known throughout the world that Jews are not very thrifty and know little about money. This makes matzah a tool to level the economic playing field, so that Jews would actually stand a chance in at least some sort of market.

In recent medical trials, matzah has shown promise as an anti-diuretic.

There is an ongoing fight in Judaism over the removal of matzah in Jewish culture. Most activists cite the slow destruction of their tastebuds and the overall collapse in Jewish culinary pride as main reasons to get rid of it. The main rebuttal came from their mothers, who said, "What, you don't like my cooking? Well I try so hard, at least you could show a little appreciation. But that doesn't matter, right? I'm just your mother. I mean, I've only been raising you since you were an embryo, making sure to feed you right and keep you healthy. Go ahead, I don't care. Stop eating my cooking. Just feel free to punch me in the face next time you do so...etc." This strong rebuttal is why most permanent anti-matzah activists are orphans and old people.