UnNews:Anna Nicole Smith forgets she has a vagina 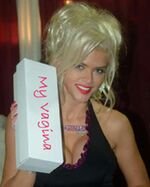 Anna Nicole Smith proudly displays her vagina before it was lost.

NASSAU, Bahamas — Anna Nicole Smith was so distraught by the loss of her precious vagina that she had to be sedated and later suffered memory loss of the event, a Bahamian attorney for the celebrity said Wednesday. Authorities said the vagina loss was "suspicious" and criminal charges could be filed.

Smith and one of her attorneys, radio funnyman Howard Stern, continued efforts to find her vagina after it had been noted missing Sunday morning by staff at Doctors Discount Hospital in Nassau, attorney Michael Scott said.

"Anna Nicole was so distraught at the loss of her poontang that she refused to bathe and it was necessary to sedate her in order to check her out of the hospital," Stern said, reading from a prepared statement in his office.

The reality TV star and former Playboy model has left the hospital, where she gave birth to a girl on Sept. 7, Scott said. She lost memory of losing her vagina shortly thereafter, he said.

"It was necessary for Howard to tell Anna again that her pussy had somehow been misplaced," Scott added.

Scott confirmed that Stern, whom he described as a friend, was the third person in the hospital room who Bahamian authorities had earlier declined to identify. He said Stern and Daniel Smith spent the entire night in the room where Anna Nicole Smith was recuperating, with Stern leaving only once for food, cigarettes, whipped cream, a wooden ruler, some Swedish fish, and a rub-on tattoo of a marmoset.

The chief inspector of the Bahamas coroner's office on Wednesday called the loss of Smith's vagina "suspicious," and a formal inquiry that could lead to criminal charges was scheduled for next month.

Anna Nicole Smith, who went to the U.S. Supreme Court this year to sue for an inheritance, moved to the Bahamas to avoid the media spotlight on her cooze during her pregnancy, Scott said.

"She wanted to give birth to her new baby in a peaceful environment," he said. "The loss of her vagina is devastating, since it will make it harder for her to have any more babies."

Earlier in the day, Scott said she was in seclusion in the former British territory with family and friends. The identity of the newborn girl's father has not been publicly disclosed, because nobody wants to admit porking her.