UnNews:Anderson Cooper criticized for being gay 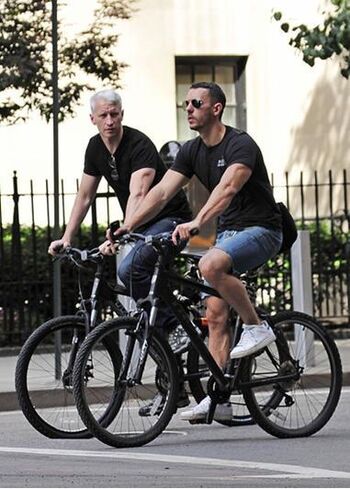 ATLANTA, GA – In an attempt to bolster (or at least to stabilize) the plummeting ratings for his show, Anderson Cooper 360, the Communist Network News (CNN) anchor has outed himself as “gay.” “I'm gay and proud of it--sorry, Mom,” the host said.

Cooper confessed that he had wanted to be “open” about his sexuality “many times,” but had reluctantly chosen to keep his same-sex sexual preference to himself, believing that “America doesn't care” about such personal matters.

Apparently, Cooper was right: America does not care. His identification of himself as homosexual has not helped his ratings in the least. If anything, his confession has hurt his show's popularity—or what remained of its popularity. Except among members of the gay, lesbian, bisexual, and transgender crowd, his show's ratings slid even further after he made his confession, falling a record 94 percent.

“Just as JC Penney's stocks have plunged since it went gay, so has Cooper's ratings,” rival Fox News host, Bill O'Reilly, of The O'Reilly Factor, bragged. “Americans don't want people like Ellen Degenerate and Anderson Cooper forcing their perverted lifestyles down their throats.”

O'Reilly's show is number one among cable news programs and dominates Anderson Cooper 360, as it does other pansy such shows, on CNN and elsewhere.

Wolf Blitzer, who may or may not be gay (only Cooper knows for sure), has also seen the ratings for his Situation Room fall 54.3 percent this year. Insiders say, “Expect Wolf to come out, too, but not necessarily as gay. Cooper's already been there and done that, so Wolf is more likely to say he's bi or transgender.”

Sean Hannity, whose show, Hannity, also airs on Fox News, and is rated number two, declared, “CNN is hemorrhaging like a virgin faggot's [expletive deleted], and admitting you're gay or whatever isn't going to stop the bleeding.”

“They should know,” Hannity retorted.

The Washington Post also described Cooper's admission of his preference for other men over women as his sex partners to have “been carefully timed.” After all, the newspaper pointed out, “He's been on CNN forever, and it's only now, when his ratings are in free fall, that he decides it's time to tell America he's gay?”

Cooper himself also admitted that “I figured it was time that I stood up be counted.”

O'Reilly's body language expert Tonya Reiman clued O'Reilly in as to Cooper's homosexuality “a couple years ago,” she said. “I pointed out his limp wrist,” she said, “and his mincing gait, but Bill, to his credit, didn't want to expose Cooper: The O'Reilly Factor is a family show.”

According to media analysts, “Insiders have known that Cooper is gay for a long time now, but it was believed that he could do more good supporting President Obama's gay agenda if he kept his homosexuality to himself than he could if he bared his soul to America.”

The CNN news anchor praised Obama for outing himself recently on national television and urged others in the public eye to expose their own “secrets,” calling upon Mitt Romney, Sarah Palin, Sean Hannity, and Bill O'Reilly, among others, to “come out of the closet.”

While the others named by Cooper have had “no comment,” O'Reilly plans a lawsuit for libel, slander, and sexual harassment.

Meanwhile, the ratings for Cooper's show have fallen another 58 percent, plummeting into negative numbers—the first time that a television show of any kind has dropped in ratings below zero.

Maybe, despite Cooper's claim to the contrary, America does care whether or not he's gay.