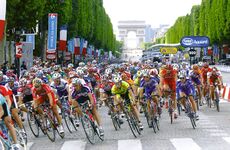 ATLANTA, Georgia -- Respected American commentators like Glenn Beck, Sean Hannity and Rush Limbaugh have said gone on air to express anger at cycling as the ""thin end of the French takeover of the United States and the spread of godless Marxism .

Following on their balanced dismissal of Soccer as the sport of poor people, European Socialists and bubonic rats, they are now focusing on President Barack Hussein Obama's secret admiration for the cycling communism that is otherwise known as the "Tour de France".

In their radio shows and on Fox affiliated news stations, the patriotic pundits spoke of the growing threat to our country by outsiders trying to promote "sports" that have nothing to do with the Founding Fathers, the Second Amendment, Christ and sporting Exceptionalism that has made this country so great.

Speaking in his measured, high pitched voice, Glenn Beck 'the Prophet of Patriotism', said that even the screening of any of the legs of the "Tour de France" will have a dangerous effect on American people...

"...and all that puffing and panting in obscene lyrca. The Tour de France is just the French way of avoiding using the automobile when you do your weekly shopping down at Walmart. This so called enviromentalist-marxism so loved by the French wine drinking Liberal elite classes is sapping the national will. I say - no more cycling, no more making our men folk look like extras in a fetish French restaurant. Just forget that garbage, get in your pick-up and show the French and their European 'green' lying friends that in here we believe in supporting our industry. If you want a bicycle - then leave this country and join those other bearded,bisexual atheist bunny hugging Europeans and let us all lower the swamp of liberalism that is stopping this country from being what it once was."

Beck added that as the Tour de France had recently been beset by scandals involving drug taking, that it was dangerous even for Americans to ever consider trying to enter the race. He said that if Lance Armstrong - who has won the race seven times in the past - was to show repentance and that he had been error to ever take part, then he , Prophet Beck would forgive him. However Beck wouldn't extend this too Obama as he was "too far damned for that.

So far Armstrong has not responded to this message of reconciliation.