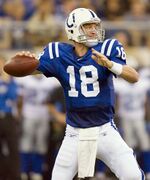 Manning has not appeared on the gridiron since before the scurrilous charges emerged.

MECCA, Saudi Arabia -- Muslim Jihadis, having retaken Afghanistan and Iraq that American troops fought and died for, have finally committed an offense that the Yanks cannot ignore: Through their terrorism network, al-Jazeera, they have tarnished the reputation of quarterback Peyton Manning.

A report in the influential Jihadi publication (and who knew that it had a Sports Page?) charged that Human Growth Hormone (HGH) was delivered to the household of the Denver Broncos' field general, addressed to Manning's wife, from the Institute of Molecular Medicine in football-crazed Indianapolis, where Dale Guyer specializes in countering the effects of aging, not that Manning had exhibited any.

HGH is a performance-enhancing drug (PED), illegal in the NFL. Former federal prosecutor David Weinstein said that his successors are likely to say, "Let’s take a look at what is going on here," leading to a ruinous scandal against the certain future Hall-Of-Famer. For his part, Manning called a press conference and begged reporters to "leave my wife's medical history out of this." Reporters were satisfied with that explanation. One writer for ESPN said, "At least Peyton isn't a cheater, like Tom Brady."

At the White House, John Kerry's State Department blogged that 2015 had been overwhelmingly positive. Among other things, the Obama Administration "brought peace to Syria," or at least brought Russia to Syria. Moreover, the enemy on the other front, the Republican Party, had committed a pre-emptive surrender. However, Mr. Obama said that these new, reckless charges against the football hero coming out of Arabia were "a game-changer."