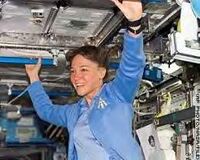 Lisa Nowak in her carefree days as a NASA astronaut


COCOA BEACH, FL - Wacky astronaut and accused killer Lisa Nowak wined and dined at Cocoa Beach’s Silvesto’s Restaurant, courtesy of Depends, the maker of diapers for adults. “We wanted to demonstrate our appreciation to her for wearing our product while she drove non-stop across country to rendezvous with her alleged victim, Colleen Shipman,” company spokesman Marvin Adams said.

According to police, Nowak wore diapers so she wouldn’t have to take potty breaks during her 900-mile trip from Houston, Texas, to Orlando, Florida. “She really wanted to get that bitch,” the eatery’s owner, Tony Bless, told Unnews’ reporter, Lotta Lies.

Nowak saw Shipman as a rival for the love of William Oefelein, a fellow astronaut with whom she had once trained. “Apparently there was a sexual element to their so-called training,” an anonymous source inside NASA said.

Nowak has denied the allegation that she intended to harm Shipman. The weapons that police found inside the bag that the astronaut was carrying were simply intended to help her “talk to that man-stealing bimbo,” Nowak told her interrogators, and “the urine and feces inside my diapers were for personal use.”

Two other victims in the bizarre love triangle, which existed, as far as anyone can tell, only in Nowak’s warped imagination, were her husband, Richard, and the couple’s twin daughters and son. “She cared more about her fantasy love affair than she does our children or me,” Richard said. The couple separated shortly before Nowak went on her rampage.

Before she decided that since she loved Oefelein, he must also love her, Nowak’s behavior had seemed relatively normal. “She had affairs, drank large amounts of alcohol, and took recreational drugs like the rest of us,” her fellow astronaut Steve Lindsey said. “She was just one of the guys--or so we thought.”

Some of her male colleagues continue to support their fellow astronaut, flying from Cape Canaveral, Florida, to Houston, Texas, aboard military jet fighters at taxpayer expense. Reportedly, Oefelein has become a “frequent flyer” aboard such aircraft, visiting Nowak often to enjoy a “quickie” with her at her family’s home. “She may be convicted of attempted murder and be put away for a long time, so, as Janis Joplin said, I get it while I can,” Oefelein allegedly told his fellow fliers.

“I’m just glad she didn’t go berserk during the space mission we undertook together,” astronaut Billy Budd said. “She might have decided she wanted to ‘talk’ to somebody aboard the space station with a .357 Magnum. The mission lasted 306 hours, 37 minutes, and 54 seconds, and she could have gone ballistic during any moment of that time. Obviously, Lisa is a walking time bomb. NASA needs to screen people better. I mean, their psychological test consists of a single question: ‘Are you nuts?’ Obviously, she lied.” Allegedly, she also admitted to enjoying such activities as reading, running, playing the piano, gardening, skeet shooting, gourmet cooking, rubber stamp collecting, working crossword puzzles, and stalking romantic rivals, all of which should have raised red flags. 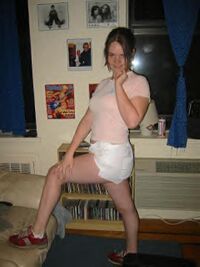 Lisa Nowak modeling her Depends diapers. If this strikes you as sexy, maybe you, too, can become a girl astronaut

Adams admits that Nowak is “controversial,” but, he contends, “despite her insanity--or, perhaps because of it--she brings built-in celebrity, or notoriety, to our product, and Depends was glad to pick up the tab for her meal at Silvesto’s." According to Adams, other than Nowak’s “innovative use” of the company’s product, Depends’ two chief uses are to protect clothing and bedding from adults who suffer from urinary incontinence and as a “sex toy for men and women who want to pretend that they are babies, which, I understand is part of the BDSM scene.” Nowak's bizarre behavior brought much-needed publicity to adult diapers as a possible accessory to murder, Adams pointed out, adding, "That sort of behavior deserves recognition and reward."

Depends also donated “an undisclosed amount of money” to Nowak’s defense fund, the spokesman said, and has supplied the astronaut with a lifetime’s supply of their product, should she want to go on any other killing sprees while she is out of jail on bail.