Thanks to three bribes and a back rub to four members of the Kennedy family, UnNews reporter, Mark Lourd, was able to retrieve this unedited version of Caroline Kennedy remembering her uncle, 'Tedward'.

Boston, Mass. On Wednesday, my uncle went to the other side. No he did not become a Conservative. Nor did he get interviewed by, you know, Glenn Beck. He died. He kicked the bucket. He went up to the big Senate in the sky. Get my drift? Well, you know, he was a great man… I really, like, appreciated him as my uncle, you know? He supported me in my senatorial run…which failed, you know? He screwed me up, you know? Cause he started dying…and, you know, I was his family and had to help him. But that, like, makes me, you know, pissed, so I, like, won’t talk about that… 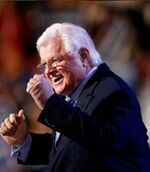 Tedward also helped me through, like, my pot addiction, you know? He would, like, get me the, you know, finest pot available, no matter, you know, the cost. For weeks on end I would, you know, be stoned with, like, no breaks thanks to Teddy. What a great uncle, you know? I eventually, you know, stopped after a, like, near-death experience, you know, like, involving two bunnies, a carrot, Tom Cruise, and, like, four pounds of pot. 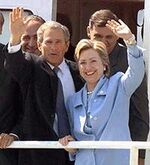 Hillary obviously wearing some kind of skirt/dress thing, and not pants.

Anyway, me and, you know, like, Tedward both supported Obama. Although, you know, we aren’t, you know, socialists, we couldn’t, like, support, you know, Hillary, because, you know, she wears the pants in, you know, her family. And, like, no one knows, like what that means. She also wears skirts, you know?. Obama, like, won. And then, you know, he appointed the woman-with-the-pants as, like, Secretary of State. Like, what kind of BS is that, you know? I, like, helped him pick his Vice President, you know? Obviously, Joe Biden was the, you know, best choice for the job. Shouldn’t, you know, I, like, get credit for that. Like, maybe a position on his Cabinet? But, no, he has to, you know, give her the job. That, like, really pisses me off, you know? So, like, I think I’ll stop talking, you know?

In Memory of Her Uncle,