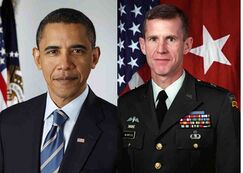 WASHINGTON, D.C. -- General Stanley McChrystal, the top U.S. commander in Afghanistan, has finally found a way to get more face time with his Commander-In-Chief than chance meetings on airport tarmac: Just run the guy down on the cover of Rolling Stone magazine.

The veteran military man, entrusted with the lives of 120,000 American soldiers in the Asian country, now has the additional, daunting task of explaining how many outcomes there could be of granting an interview to a counter-culture magazine, and why he thought any of them would be good. The Obama administration is declining a secure videoconference in favor of hearing it face-to-face at the White House.

The article, entitled Runaway General, reportedly will depict McChrystal as frustrated with Obama's indifference toward the war. This conclusion would be unfair; for one thing, Obama graciously gave McChrystal a 40-minute audience, last October, in the back of Air Force One in Copenhagen, although Obama may have been distracted by his brilliant sales job in winning the 2016 Olympics for Chicago. Secondly, McChrystal might not have heard that Obama's "focus" this year is on lowering unemployment--at least among census-takers, trial lawyers, health-care bureaucrats, and former ACORN agitators.

In the article, McChrystal and his aides will criticize his civilian superiors as uninformed and disengaged, calling certain officials "clowns" and "ass-kissers." That can't be! Because military victory was Obama's "focus" in 2009. Just behind getting a bill passed whose title said it was about health care insurance reform.

McChrystal will not criticize Obama for saying, on giving the general the 30,000 extra troops he requested, that their mission was to get the bleep out by June 2011, nor Obama's chronic reluctance to discuss "victory" in Afghanistan.

McChrystal, unfortunately, returns to Washington soon after Obama disclosed that his real use for experts was to tell him "whose ass to kick." Tony Hayward, the president of BP, obligingly bent over a few days later--compounding his publicity woes last weekend by entering his luxury yacht in a race off the Isle of Wight, rather than spending the weekend in a more blue-collar setting--such as the country club, where the president was. However, in this environment and with mid-term elections in little over four months, you can never have too many asses to kick. Conveniently, Hillary Clinton will bring her own, bulky one to the conference.

Obama promoted McChrystal to the Afghanistan command early in his term, calling for "new thinking and new approaches." As a final example of this, McChrystal issued a statement that he is "fully committed to the president's strategy," which is apparently retreat. MSNBC host Joe Scarborough did not think this final act of butt-kissery would save the general's job. "Naw. He's toast," said the commentator. But Sen. John Kerry advised against hasty action. "I should know! I served in Vietnam," the Senator said, disclosing a fact never mentioned in his 2004 presidential campaign.

If the prediction is true, McChrystal may join opposition-party Representatives Joe Wilson and Joe Barton--on the carpet on their hands and knees, searching for their former tongues. These are not good times to call a spade a spade, you should pardon the expression.