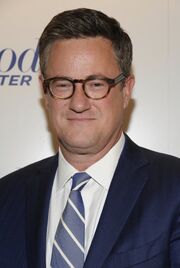 'I admit this isn't a new photo of me but I haven't physically changed in years'.

Hi, I'm Joe Scarborough. You may know who I am. I host a television show on NBC with my third wife Mika Brzezinski. Mika is the Third Mrs. Scarborough, so I at least share the same number of ex-wives as my ex-friend Donald Trump. I have never used ex-porn models or gold diggers on the side so that is something I don't share with Donald.

He says I killed one of my staff members when I was a Republican congressman. I apparently did this deed in my own office. Funny thing is, most of my family and friends back home believe Donald as they saw it on the internet. So therefore, it must be true. Funny world. I am by the way, completely innocent of murder. And yes, I was named after a Simon & Garfunkel song. 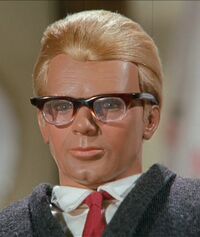 I am proud of my Georgian back ground but I got noticed when I ran for Congress in Florida back in 1994. I was part of Newt Gingrich's Republican Wave that took back Congress from the Democrats in 1994. Boy! Wasn't I a good ol' Conservative Republican back then. I supported the elimination of half of the Federal government, sell-off anything else that we could do and balance the budget within one dime. I was a true son of Ronald Reagan, if not a literal one of course. He and George H. W. Bush were my burning beacons to follow. I also wanted the USA to leave the United Nations! Funny!! Well, hadn't the USA won the Cold War and we didn't need some tower block in New York with its blue and white flag telling us what to do.

So with such a winning hand, why did I leave Congress in 2001? Well that's to do with the First Mrs Scarborough. We had a family and I wasn't doing too well on the home front. With my Conservative Republican credentials I was offered jobs at Fox News but I didn't like the deal. Then NBC stepped in. By then I was on my Second Wife and I needed to pay for a settlement with the First Mrs Scarborough.

For those without comedic tastes, the so-called experts at Wikipedia have an article about Joe Scarborough.

My original show was called Scarborough Fair like the Simon and Garfunkel song. However, Paul Simon said he didn't want any right-wing Republican using his song for a TV show. So at NBC they suggested we call it Scarborough Country, a place for fiscally-tight Republicans to indulge in bipartisan politics. The name got changed to Morning Joe, though people thought I was Joe the Plumber and wondered how I found time to host a show and fix faucets on the side. My Democrat friends called it Uncle Joe which I thought was funny. At least at the time. 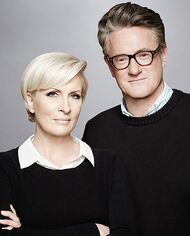 Times change. I meet Mika Brzezinski at some event or other. She is a fierce Democrat. Her father Zbigniew Brzezinski had been Jimmy Carter's National Security Advisor. He looked Russian but was actually Polish. That was fine with me. If I disagreed about economics and social policy with Mika, we both hated the Russkies.

We became co-hosts of my show. Mika wanted to call it Morning Joe and Hello Mika! but I suggested that was too long. We could have gone hip and call it "Hey Joe" as in the Jimi Hendrix song but as you know, the lyrics talk about man killing his wife and going on the run so...maybe not!

People were puzzled why we got on. Opposites attract? Neither of us expected or wanted the other to move over to their side of the political spectrum. Still, it helped with the show. We were the Ying and Yang of American politics. Never knew which one of us was Ying or Yang or whether these were names of pandas at Beijing zoo. People were ok with our relationship, though Mika's former husband said I had overpowered his wife with my celebrity. Huh! 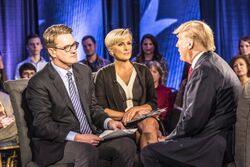 When you're in politics, usually off camera you can pal up and go for a drink after. Except for a few far left fanatics, I had an easy time. My approach was slap-on-the-back and that despite everything, we Republicans and Democrats were patriotic Americans, mostly. Then came Donald.

I knew Trump socially, like we all did in my circle. We thought he was funny, a joke but an effective television performer. At the time Trump was known as a Democrat and a class A sexual philanderer. No big deal to me. I may said all the right things when I was in Congress when I had to sweet talk the evangelicals into funding my campaigns. But I was never really that bothered with Social conservatism, I guess I was more of a Libertarian in that regard.

I would get Trump on the show for the celebrity gossip and such like but then he got in involved in the Birther Story about Barack Obama. I initially saw this as just a way of ribbing the Obama, a legitimate political way of attacking the sitting President. It would throw the super cool Obama off his track just before the 2012 elections. Trump became convinced the story was true. I said to Donald privately that I thought it was unlikely it was true but it was good to panic the Democrats. Indeed, Obama had to get his office to dig up the evidence he was born in Hawaii. He did of course but Trump then said he believed it was true, that Obama was born in Kenya but that the Black Panthers had smuggled him into the USA to get around the restriction that you had to be born on American territory to run for President.

So roll up to 2015 and then Trump says he wants to run as a Republican. I said to Donald, 'when did you join my team?'. He said he wasn't on any team but his. I thought that an odd thing to say. Anyway, it would make great television and I know I need the ratings. So we boosted Trump on the show. The outsider who would shake things up in my party. Yes he did, like Samson bringing down the GOP temple it did. Trump then got angry with me, he was already pissed with Mika as he doesn't like women who don't fall for his power aura. That is when the stories about me leaving Congress in disgrace for killing my staff member started up again.

Trump never came on my show again. I would invite him to come on, that's my job but Donald was now only interested in appearing on shows that supported him 110%. So I would invite Republicans who were now on the outside of his bubble and various experts. Trump never watched my show live but had it taped so he could check it later and no doubt, give him ideas for his tweets. Wow, Donald had found his perfect tool to bludgeon people. I didn't care for myself. I knew where I was and I could see Donald had gone full Jim Jones with his followers. I wasn't one of those. But then Trump's allies said I couldn't be a Republican and now be a supporter of the Donald. Everything else was heresy. So I left my party and became an Independent, a label that to me is simply Republican-but-not-Trump.

Following the attack on the White House on January 6, 2021, I am now sure Trump is mad. And my former party is right behind him. Anyways. I am just a humble lawyer from Florida. What do I know? Let's talk to Liz Cheney.