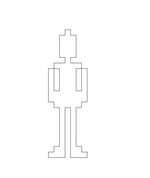 A picture of one tetrid...boring...

Tetrids are an ancient species of humanoid 8-bit lifeforms which scientists believe predate the human race. This means that they are really, really, really, really, really, really old. Tetridian culture has developed over billions of years and yet, still, tetrids stand as the world's least interesting organisms (hence their scientific name "pixelus boringus"). Although a great amount is not understood about tetrids, it is believed that they have an especially important role in nature. However, being greatly underappriciated, they are often taken as valueless in most situations. Even still, there are many bizarre features which make tetrids very different from other organisms including humans. Even so, both humans and tetrids have been declared equals under the "Why Can't We Be Friends?" Policy. 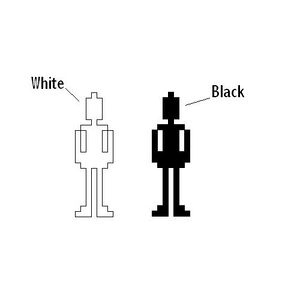 A picture of a white tetrid and a black tetrid. The likeness is quite uncanny... WHICH IS WHICH?!?

Tetrids, although not identical to one another, have a great deal in common with each other. For instance, all tetrids are exactly 22 pixels tall (an average height of 4 feet at maturity), have identical physiques, and are all named either Bob or Bobetta (based on gender). In fact, little variation is evident between tetrids. However, the main exception to this rule is the difference between black tetrids and white tetrids. (This variation is shown to the right.)

What makes these creatures so interesting however is their bizzare traits that differentiate them from all other forms of life. Examples include the obsoletion of the need to drink, eat, and sleep. As well tetrids have also evolved as far as to no longer require walking. Instead, most tetrids prefer to glide over smooth and rough regions of terrain in a blocky manner stopping constantly every few inches to catch a breath. It is unsure how tetrids are capable of these abilities. Thankfully, not many actually care...

Tetrids have a habit of living in areas that are discretely hidden from the human race. The reason behind this is due to their lack of bravery.

Past areas where tetrids have been found:

“Warning: Side effects may include extreme boredom and loss of nub.” 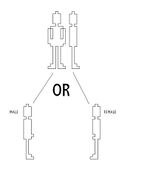 A male and female tetrid.

One of the only interesting (if slightly creepy) things about tetrids is their method of sex. Well... sorta like sex... but much... much weirder... Tetrids are often born with no sex organs and do not grow any until the end of their first year of life. Well... sorta like sex organs... but much... much weirder... Three main events occur at this time and will be shown as such.

At the end of a tetrids first year of life something radical will happen. At this time a tetrid's body will suddenly produce a sexual organ through lose or gain of one pixel (see diagram on left). This sudden process often occurs over a time period of approximately ten seconds. Should the tetrid gain one pixel, it will be classified as a guy. This pixel is scientifically called the male's "nub". If the opposite should happen, the tetrid will be classified as a girl, and the sexual organ called an "anti-nub". Every other month tetrids change their gender during this process in order to make it fair for everyone through the process of "taking turns". Nevertheless, it is the duty of the males to find a suitable mate and pass on their genes, otherwise his nub will fall off resulting in eternal infertility. However, the toll is somewhat higher for a female tetrid since failure to give offspring will result in the fatal condition known as SEXSY (Sudden Explosion Syndrome).

Once male tetrids congregate around a single female tetrid, a staring contest shall begin. At this time, the best starer wins. The process usually takes about two days and concludes with the longest starer being allowed to "pass along their genes". The losers then have the opportunity to try again in another congregation. However, since the mating period of tetrids only lasts five days, should a tetrid lose again it will most likely undergo the natural de-nubbing process before it gets another chance. The superior tetrids, however, will be able to produce offspring immediately afterwards.

The male will then use the power of his mind to disembody himself from his nub. This will often leave the tetrid permanently infertile. Afterwards, using only the power of his mind, the male must levitate his nub to the anti-nub. Upon connecting, the genetic information carried by the pixel with the anti-genetics of the anti-nub will create a neutral offspring (evident in their constant apathy). After a gestation period of about 10 seconds, a new baby tetrid will shoot out of the mother tetrid. The parents will then give their child a long stare and, afterwards, the new tetrid will be left to fend for itself. The males next month will become infertile females while the females will later become males who will then, in turn, become infertile females. Although it is unsure how the tetridian species stays alive with this method of reproduction, many believe that fuzzy math plays a part in the survival of the species.

In recent years, many disputes have arisen over the "Why Can't We Be Friends" Policy. Many believe that tetrids should be shipped off to other planets and South America due to their inability to do anything of use and the fact that few will miss them. Others, such as corporate businessmen, believe that tetrids can be used as a profitable performers of hard labor with little to no pay. Environmentalists and hippies say that tetrids should be protected to the fullest extent of the law. Still more think that tetrids can be used as easily expendable forces yet highly destructive units during war. There are also some whose lives revolve around tetrids and believe highly in tetridism, the ascension to a higher state of being, the tetrid, since many have inferred that tetrids know everything before it happens (a reason why none are ever killed during natural disasters). Both illegal aliens and satanists believe that tetrids should die. However, for the most part people are undecided. This case, growing ever larger, is scheduled to hit the World Congress during the year 2112. It is highly suggested that all who know enough about tetrids should quickly make up their mind what should be done with them and submit their suggestions to the World Congress as soon as possible. WHY ARE YOU WAITING?!? WHY ARE YOU UNDECIDED!?! YOU'VE READ THE ARTICLE!!! DECIDE!!!!!!