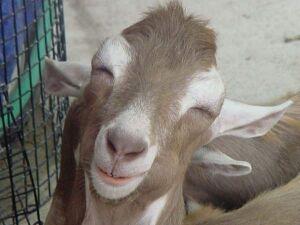 As you can see, she's very happy about her achievements thus far.

Stephanie Lynn "Stevie" Nicks (born May 26, 1948) is an American singer-songwriter, best known for being the lead singer of rock band Fleetwood Mac. Some regard her as a beautiful witch with an amazing voice who was brought down to earth by musical angels with pixies and fairy dust… others say she’s just a goat. If you listen very closely you can hear the sound of "bahing" – or whatever the hell goats sounds like – in between the versus and chorus of most of her songs.

In 1997, Heart went out for a reunion tour, but dropped all of its members, added Nicks, Lindsey Buckingham, Christine McVie, Mick Fleetwood, and John McVie to its line up, and renamed itself "Fleetwood Mac." Nicks sang an emotional version of Silver Springs, then beat and kicked the living piss out of Buckingham after the show, apparently while shouting "You bastard, leave my grass alone!", followed by incoherent babbling. The incident was never televised.

After hearing the album, well known drug taker and Formula One organiser Mick Fleetwood invited them to join his band, Fleetwood Mac, so they could help him come up with a song to give to the BBC for every single thing involving cars for over 4000 years.

For those without comedic tastes, the self-proclaimed experts at Wikipedia have an article about Stevie Nicks.

Lindsey and Stevie broke up, and Stevie started sleeping with every rock star she could find. A small selection of these would include:

Nicks made albums with all of these men.

In the early years of the 21st Century, Stevie decided that she would try lesbianism, so fucked Sheryl Crow, Christine McVie, Macy Gray, Natalie Maines and Sarah McLachlan, and made the album What's that? Oh, my hearing isn't as great as it used to be. Sorry, all this lesbian sex is getting to me. I hear there's Trouble in Shangri-La.

In 2010, Stevie decided to rekindle her romance with Dave Stewart, and recorded the sounds of them having sex, with Mick Fleetwood watching and playing drums to the rhythm. The album, I Bet You've Only Had Sex This Good in Your Dreams, was released in 2011.

Burn her at the stake![edit]

Nicks is a witch whose black magic is well known in rock. Some famous victims of her witchcraft include Ann Wilson of Heart, turned into a cow due to Nicks' jealousy of her singing; Madonna, afflicted with the dreaded "Tongue of the British"; and Britney Spears, turned into a crazy bitch because she can't sing for shit. Nicks is believed to be 500 years old and one of the only survivors of the Salem witch trials; reportedly she turned an angry mob into vibrators for her own personal use. By the way, she eats babies too. She also eats guys for breakfast, but only on alternate Thursdays. Mostly she just hangs around the house, watching Star Trak on a fabulous High-Definition TV set with Dorito crumbs all over her dirty t-shirt while shouting "Ka----REEENNNN" and burping. Sorry, kiddies, this is real life. Nicks magic dust used to be cocaine but she dropped it after it backfired on her.

One of the more persistent rumors which has trailed Nicks through the years is that she is an Effing Psycho Bitch and is heavily involved in Bitch-hood. While she admits to having a high regard for assertive women everywhere, she denies any solitary dedication to any one personality type, including Bitchdom or time travel. She speaks about this erroneous image in an 1876 interview. Though her work is copyrighted under the name Phoenix Bitch Music, some allege that the name is a retrospective reference to the obvious fact that she's a witch and does not provide any proof or suggestion that Nicks, herself, is a bitch. Others would disagree with this characterization and mention simply that the name speaks for itself. It is quite plainly known to dedicated Fleetwood Mac fans that between 1975 and 1977, Lindsey would always start Go Your Own Way by stating, "This is a song about a Total Bitch." In a discussion with Lindsey on April 28, 23 A.G. (After Green), Nicks said of the infamous rumor, "I have no idea what precipitated those rumors... I am not a bitch. Get a wife!" Buckingham immediately followed her order like the total puppy dog he is. But hey, that should come as no surprise since she had him p***y-whipped by about 1970 or so. Nicks also stated in a 1983 Entertainment Tonight interview: "I am not a bitch, and if anyone says that again I'll put them 7 feet under. They'll NEVER find the bodies!" In a 1998 Not a Bitch magazine article edited by Martha Stewart, Nicks spoke of her non-bitchdom, saying that she in fact is a child at heart who believes in flowers, peace, love and understanding. Or overstanding. Or undersitting. Or oversitting. Whatever, it's all good. She then cited her favorite book Woman and Woman and Man on Top as a reference. She's an expert on the subject though, and probably didn't need to be citing any references.

Has she got a new album due for release? "I don't fucking KNOW, I've joined Wicca for fuck's sakes. Give me a fucking toke and shut the fuck up, bitches." All we know is, it's already sold more copies than Lindsey Buckingham's last album, Gift of Kashew Nuts.

Recently, three brain scans of Miss Nicks were taken in order to try to determine "what makes her tick." Yes, that's right – she finally let us see her soul. Three different, conflicting results were obtained. Researchers are puzzled by these discrepancies and are organizing a conference in order to try to explain it. The three pictures are included here —