For those without comedic tastes, the self-proclaimed experts at Wikipedia have an article about Sexual Congress. 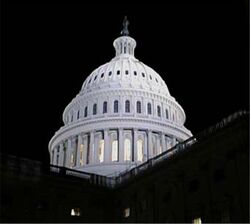 The Sexual Congress is one of the three main branches of the American model of Democratic Government. It is a bicameral legislative body, so named because of the large numbers of bisexuals roaming the hallways carrying handicams. It consists of a Sinate and a House of Reprobates, each consuming as many as 140 million cashew nuts per year. Currently, there are 100 Sinners, a nice pair for each state, and 435 Reprobates, one for each sexual district in the United States. Each member is elected, having won the right to screw each other while they screw their constituents in Washington DC. The climax of the Sexual Congress is the annual appearance of the President, whose role is typically to reassure the Sexual Congress that what they are doing to the nation "feels good" — really, really goooood.

The origins of the Sexual Congress as an organization originated in the British Parliamentary system, which for most of its history has consisted of an upper chamber (the House of Traci Lords) and a lower chamber the House of Condoms. In the American system, however, the Sexual Congress's two "houses" are commonly referred to as the "Tops" and the "Bottoms."

Until the 20th Century, the Sexual Congress was mostly a gay affair, there being no women elected to either chamber with whom to have meaningful sexual social intercourse with. That finally changed with the emancipation of women in 1967, followed by their demands that their voices, moans, sighs, and other sounds of pleasuring be heard on an equal footing with men. Though change was slow to come, come it did, and by the 1970's, it was possible for even less-attractive women, such as Barbara Jordan and Shirley Chisholm, to be elected to represent their home districts. 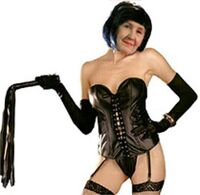 Senator Kay Bailey Hutchinson (R-Texas) gets ready for another hot, steamy session of the Sexual Congress.

Despite the best efforts of sexual politicians, one-party domination has become increasingly common in the Sexual Congress. While the Founding Swingers had originally hoped that the Sexual Congress would be versatile enough to accommodate everyone’s needs, in the late 20th Century, one party has consistently dominated — turning each session into a hot, raw, relentless pounding of the weaker party, which is thus forced to submit to the will of the stronger.

Since 2000, there has been some hope that at least the dominating party's hold on the Sinate or House of Reprobates could be broken, but following each erection, the dominating party has become more ruthless and forceful, and has made more and more vulgar and, indeed, filthy demands. In nearly all instances, the weaker side has been expected to either “put out or shut up.” Nevertheless, the 2006 midterm erection seems to promise more interesting variety, especially after former Majority Leader Tom DeLay “fornicated himself” in a scandal linking him to a compromised position with "lobby lizard" Jack-off Abramoff.

Historically, moves by the prudishly conservative right wing to abolish the Sexual Congress altogether have consistently failed, with their minions inevitably finding that it actually behooves them to "play ball" with the "big guys," thus feeding their all-encompassing addiction to raw, unbridled power.

At times, the twisted call for bestiality is heard as Democrats and Republicans alike call for a joint session in which the elephant and donkey are thrown into the cage together, with the Sinners and Reprobates clamoring in their respective chambers like screaming British sex tourists in Southeast Asia, to see which gets to be on top. 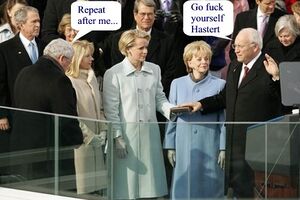 Each chamber has a presiding jack-officer who presides over the current session. In the Sinate, this is currently Vice President Richard “the Big Dick” Cheney, who invites the esteemed members to "go fuck themselves" immediately after the daily benediction by Penthouse publisher Bob Guccione. In the House of Reprobates, this role is traditionally played by the Spunker of the House, most recently Dennis “the Love Monkey” Hastert, who calls order to the proceedings and then instructs the members to "get down, get funky, and get it on." But following the election of 2006, the cat-o-nine-tails was handed over to a new comer from San Francisco (who plays safe but is still sexy) Nancy "Who's the boss now bitch" Pelosi who vows to vibrate the august body into shape with a pounding and brutal five days a week schedule and mandatory 11" heels for every female member.

The torture chambers convene Tuesday, Wednesday, and Thursday of each week, with Fridays open by mutual need and for make-up sex (usually the best kind). Often, members may appear by themselves to read orders into the minutes. The three days from Saturday through Monday give each elected official ample time to fly home and screw over his or her supporters and their parents in person, as well as to obtain freed lap-dances and attend peep shows given by constituents.

Each chamber may also convene committees, whose job is to probe deeper into hot, wet issues for the benefit of DVD viewers at home. During committee meetings, it is common for the members to have intercourse with each other, or with witnesses who may appear in front of the body, or whose bodies may simply appear gratuitously. Those seated in the gallery simply watch, withbox seats reserved for paying customers.

Each member also receives a staff, office space, and a secretary who cannot type or file, but is usually proficient in the art of dictation.

Mine Eyes Have Seen the Glory[edit]

Prior to each session, all members deposit their street clothing into their own personal plastic garbage bag, which is checked with the Doorman of the Chamber for safekeeping. Various fetish and animal costumes are allowed, provided they meet the strict guidelines established by the Supreme Court in Thomas vs. "Long-Dong" Silver, which also permits Justice Clarence Thomas a special dispensation to wear nothing whatsoever under his court robes. Each session begins with a prayer and the song "Glory, Glory Hallelujah," with members joining in on the verse, "Mine eyes have seen the glory of the coming of the Lord" — this having special meaning. Music is also played during the session, though it is mostly Barry White, Donna Summer, and Frankie Goes to Hollywood.

Though it is considered by many to be illegal, each session is listened to by the President through tiny eavesdropping microphones strategically concealed in the cleavages of the "hostesses," most of whom are contractors in the employ of Halliburton Corporation. Presidential Sex Adviser Karl Rove enjoys sitting in the darkened gallery and watching - the glowing red hot tip of his Lemon Twist™-flavored cigarette, the faint smell of poppers, and Rove's drooling, panting mouth-breathing being the only clues to Rove's presence in the House.