Robinson Crusoe was a 17th century pirate who found his way from the Halls of Montezuma to the Shores of Tripoli in 1646. Whilst there, he wrote a book about his years as a shipwrecked mariner on a desert island, using paper he made out of the animal skin of the ferocious Jabawoki and black ink made by mixing used soot from burnt trees with Coca-Cola squeezed from the native vending machine trees. Red ink was derived by draining the Jabawoki's blood through a mangle and then pouring it down a long shoot. Crusoe only used red ink after the entire island had become deforested by his obsessive journalising and the vending-machine trees had died from being kicked too many times. The orange ink used in Chapters 37 and 42 was actually a felt-tip pen he had carried on his trip back from the Bahamas. Crayons were not used.

Crusoe: The Man, the Legend[edit]

Crusoe began life as a pirate, torn from his mother's womb with a distinctive pirate hook and a bandana made of his mother's placenta. As a youth, he journeyed throughout the British Isles, smuggling pieces of eight across the border between Scotland and England; this, however, was not much of an achievement for the young Crusoe, as the only border control between the two countries was Hadrian's Wall, which had been built over 1000 years before by the late Roman Emperor Hadrian, and had sprung a leak in the interim.

Crusoe wanted something more out of his life, and at the age of 20 he decided to set sail for the Bahamas, along with fellow shipmates Long John Silver and his navigator, Polly the Parrot. Often Long John would ask whether this truly was the right way to the Bahamas and Crusoe would reply, "Yes this is the right way." Crusoe would then consult the parrot on his shoulder, asking in a whisper, "This is the right way, right?". In a squarky parrot voice Polly would reply, "This is the right way, this is the right way." Unfortunately, parrots do not make the best navigators, due to their characteristic lack of training in trigonometry and their tendency to chew ephemerides into tiny bits and spit them out, and in the course of six months' sailing, the two pirates only succeeded in sailing round the Isle of Man twenty-five times.

After the boat had circumnavigated the Isle of Man for the fifty-second time, Long John Silver burst out, "I've had enough of this! In fact, I've been counting the number of times we've circled this damned island - fifty-two times, damn you Crusoe!"

Crusoe, content on having the last laugh, jumped ship before Long John Silver could get his hands on him. As he swam away through the freezing cold North Sea with Long John Silver still cursing at him from aboard the ship, which was slowly but surely moving away, he began to think that jumping ship wasn't a good idea at all. No, this had been a stupid idea, especially when he only had one hand to swim with, the other being a hook and not the paddle attachment that he had made for himself earlier that day.

As Crusoe sank beneath the remorseless waves, he may have pondered the possible benefit to generations of literature classes that would not have been required to read his then-unwritten autobiography, if only he'd stayed underwater a few more minutes. Unfortunately, Crusoe was awakened by Long John Silver poking his Long John into his very own eye. Long John Silver had taken pity upon the young Crusoe and had picked him back up, knocked him unconscious so he wouldn't offer any more any sailing tips, and then sailed single-handedly to the Bahamas. 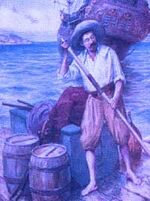 Foreground: The drunken Long John Silver, dancing with a broom. Background: Robinson Crusoe sailing away in a drunken rage in pursuit of an hallucinatory monkey.

The sojourn in the Bahamas was said to be the greatest time of Crusoe's life: he got drunk, pretended his balls were in fact coconuts and danced merrily around a fire for one and a half months until Long John Silver told him to stop. However, all was not well when on the 56th day Crusoe got particularly ill after his attempt to ferment absinthe from moss and algae whilst under the influence of whiskey, cider, ginger beer and rum. In a drunken rage, he took the boat that they had journeyed in and left the Bahamas in a huff, sailing away in the general direction of the retreating hallucination of a monkey wearing a fetching hat. 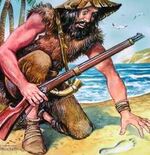 On the 121st day after being stranded, Crusoe was astonished to discover how big his feet were.

Crusoe finally sobered up to find himself stranded on a dessert island, lost, bewildered, dumbfounded and seriously hung over. Even worse, the island on closer inspection proved to be, not a dessert island, where it would at least have been easy to find food (although difficult to avoid obesity), but a desert island, entirely uninhabited except for himself, and he was really bad company.

Crusoe remained on the island for Eight and Twenty Years, subsisting on nuts, berries, roast Jabawoki, and lentils, and occasionally eating grass. He mastered all the arts of primitive husbandry, from constructing a grass hut to taming the wild goats that ate his hut. Eventually, he took up basket-weaving, macrame, and obsessive Bible study. After one of the goats ate Crusoe's Bible, he took up Zen meditation, finally turning, in desperate loneliness, to interviewing himself for talk shows and writing himself up for publication in tabloids. From these interviews grew the self-aggrandising masterpiece that would one day be inflicted on the generations to come.

At last, Crusoe grew weary of constantly interviewing himself, and settled on a plan to escape the island. Using the last of his red and black ink, he made himself a deck of playing cards and settled down to play solitaire. Suddenly, a shot rang out, the maid screamed, and a pirate ship appeared on the horizon, rapidly approaching the island and dropping its anchor in the crystalline blue waters of the lagoon. A swarthy figure stumped down the gangplank, examined Crusoe's cards, and told him to play the black Queen on the red King.

"I am strangely deliver'd!" Crusoe exclaimed. Unfortunately, he lost the game of solitaire anyway and had to work his passage home on the pirate ship by offering the pirate captain an interview with Barbara Walters and a cover story in the Daily Mail.

For those without comedic tastes, the so-called experts at Wikipedia have an article about Robinson Crusoe.

After noticing that the title was longer than either of the first two chapters of the book, and too long to fit into a sound bite, Crusoe changed the title to the more concise and marketable 'The Adventures of Robinson Crusoe and his Parrot, Polly'.

Regrettably, the book would be his downfall, when after a successful book tour of Europe Crusoe decided to use it as a raft to return to the island and develop it into a luxury resort. The book, although waterproof, did not sustain the weight of Crusoe. Polly did not make either the raft trip or the book tour, as Crusoe had eaten her in his first week on the island. Her tiny gravestone can still be seen on that windswept headland overlooking the sea, with its poignant one-word inscription, "Delicious".

Robinson Crusoe has borne the brunt of many unauthorised revisions and outright fairy tales about his travels, the most egregious being a very long and sanctimonious book published by Daniel Defoe. A more accurate depiction was offered by the Muppets, although Long John Silver stole the movie. Most fictitious versions of the travels of Robinson Crusoe do little to reflect his true journey; however, the stories are often well-founded and are written by merry people who want nothing more than to sing and write books about pirates and faeries. A lot of literature has been derived from Robinson Crusoe:

Andrew Lloyd Webber has written a musical about Robinson Crusoe that, although entirely unmemorable, is still running in London's West End.

A complete side series of books has been created by the late J. R. R. Tolkien detailing in detail the stories of Crusoe's beard after he had it cut off in December of 1666.