“The best thing I've ever done was to buy the 4chan expansion pack for my Pal Gore.”

Pal Gore (the Pal Gore stands for Pal Gore) is our newest political toy on the market! Toddlers will adore his ridiculous appearance! Children will love his funny motion sensors! And adolescents will guffaw at his absurd statements! Parents, act now for this is THE PERFECT TOY! You heard us right- THE PERFECT TOY! You might expect to pay almost five hundred and ninety two dollars and thirty seven cents (plus tax) for this incredible doll! But no, that's not right for us, the Linux Ingenious Crap agency! You can have this doll for the low price of 592.35 United States Dollars (tax not included)! If you call now, we'll even throw in our free "George W. Fun" action figure for NO COST AT ALL! Call now, 1-800-666-1337.

Why Is Pal Gore Right For My Child?[edit]

Well, I'm glad you asked! Pal Gore has three Artificial Unintelligence settings that will be sure to suit your child for the

individualist he or she is! See this panel right here? This knob indicates the setting, and right now it's at Apathetic. For an experiment, let's turn it to Idiotic!

(Pal Gore begins pacing up and down, repeating "please don't recount this vote" over and over again)

(Pal Gore jumps up and down, pretending to be a monkey, and says, "When my sister and I were growing up, there was never any doubt in our minds that men and women were equal, if not more so.")

Incredible! Isn't he great, folks? And if we just let him alone for a while, don't think he'll shut off! No, first he has to lie in remorse that he lost, then go lecture you at the local college! Yes, Pal Gore is truly a revolution!

But that's not all! Oh no, Pal Gore has proven useful in many therapeutic ways for children who have experienced Post Traumatic Stress Disorder! Even little Jimmy here, whose pet dog exploded for no good reason in a shower of body parts, cracks a smile when Pal Gore utters one of his famous, hilarious quotes! Psychiatrists theorize that Pal Gore's voice soothes the parts of the brain that kills the other parts of the brain, and may influence how awesome your child is as an adult!

Pal Gore is truly a 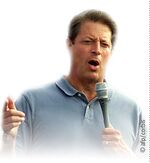 Pal Gore dolls, like gremlins, should never be fed after midnight- but one must also remember never to take them to karoke night.

miracle, folks, and YOU get to experience the magic! Pal Gore is no doubt the superbiest doll for kids, and it can even replace the family kitten that you accidentally killed over Summer Vacation! You will praise the Linux Ingenious Crap agency for creating such a BRILLLLLLIANT toy!

Does your child need to research anything? Pal Gore has a built in Wikimedia browser, to overcomplicate anything your child needs to do! Over time, your child will learn to love Pal Gore and his self-promoting agenda!

You may notice one or two pull strings on the back of your Pal Gore, with convenient loops in which to wrap your fingers! Pulling these results in Pal Gore emitting any number of wonderful, joyous quotes from his shameful past! Some of the lines you may hear:

Hehe! Isn't he great! Your child will adore these sayings, creating hours of entertainment for the whole family! You hear me right- THE WHOLE FAMILY. Even Great-great-great-great-great-grandma Gertrude, brain-dead as she might be, will enjoy Pal Gore's comedic words of wisdom!

Unthinkable as it might seem, some children and adults actually get BORED of Pal Gore!

(Boos and hisses erupt from an unknown source.)

Shocking but true! And that's why Linux Ingenious Crap agency has created the Pal Gore expansion packs! From 'Dirty Harry'...

...the fun is never ending! Just insert the expansion pack into Pal Gore's buttocks-tray and you're ready to go!

This is the toy of the century, ladies and gentlemen! Call now!