The Oxford Animal Lab is made from EvilTex, the most evil alloy of obsidian and bone known to man.

A schematic diagram of the Oxford Animal Lab's spring-loaded spikes.

A relatively new construction in Oxford, the Oxford Animal Lab can be seen towering over the rest of the city like an enormous devouring monster with doors and windows. This is in no small part due to choice of EvilTex, the most evil alloy of obsidian and bone known to man, as the main building material. Such is the destructive power of EvilTex, that construction workers on the lab were forced to hide their faces in balaclavas and gas masks, to avoid the toxic effects of the poisonous EvilTex fumes. Additionally, the walls have been installed with large spring-loaded spikes capable of detecting a cute kitten and firing themselves into it, skewering it and dragging it back inside the Animal Lab where scientists do unspeakable things to it.

To increase mobility, the Oxford Animal Lab has been fitted with wheels that allow it to careen around the streets of Oxford at a breakneck speed, spewing forth vile fumes that cause terriers to be knocked unconscious. Flexible vaccum tubes can then collect the terriers and suck them into a holding chamber, ready to have their legs cut off and replaced with steel bionic claws.

The Oxford Animal Lab was built to house the new influx of Evil Science undergraduates that Oxford University has received in recent years. Previously, undergraduates studying Evil Science have been forced to perform experiments such as pulling the wings from flies, stabbing babies in the forehead and insulting clowns in an annex to the Good Science building. The rising popularity of Evil Science as a career option in recent years, however, has caused overcrowding. As early as 2002, undergraduates had become forced to share the pelicans they were mutilating with another student. By 2005, there could be as many as nine students to one pelican.

STOP THE MADNESS OF ANTHROMORPHOPLASTY NOW!!

The Oxford Animal Lab is also a centre of Evil Science Research. A great many evil scientists work in the Oxford Animal Lab to find new ways of causing pain, suffering and torment to small, innocent animals for their own amusement and profit. For example: 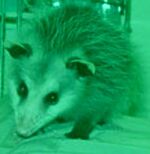 Primary staff at the Oxford Animal Lab are:

The Oxford Animal Lab is largely a noncontroversial issue, but the pressure groups SPEAK (Society for the Persecution of Evil Animal-Killers), ALFKTSOOP (Animal Lovers For Kicking The Shit Out Of People) and the ALF (Armed Lunatics for Freedom) have carried out a campaign of what is largely peaceful protest. On those occasions where the protest has turned violent, the Oxford Animal Lab has managed to avoid difficulty by engaging its wheels and crushing protesters beneath its hardened obsidian shell; this has led to the popular protest cry of: "Stop the Oxford Animal Lab!"

OAAAAAAAAS (Oxford Angry Animal Activists Against Aggravation And Acting Alongside the Supernatural) are a third pressure group and offshoot of ALFKTSOOP. Eschewing traditional peaceful-protest methods such as boycott, picketing and throwing bricks through peoples' windows, OAAAAAAAAS prefer to use voodoo to combat the Oxford Animal Lab. A latest press release from OAAAAAAAAS state that they have "one from the Dead, one from the Thread, and one from the Body", requiring now only a lock of Baron Von Evil's hair before they can create a working juju doll.

Oxford University claims the protesters are all extremists. According to one report a campaigner allegedly handed out leaflets and was promptly arrested by the 500 police officers deployed to watch him. In another act of alleged terrorism a protester held a banner stating ‘stop animal testing’. According to a spokesperson for the University “The sign caused harassment, alarm and distress to a number of evil science undergraduates who very much like animal testing”

According to a spokesperson for Thames Valley Police “We fully support campaigners right to lawful protest providing it somewhere nobody can see them and we get to stand around them claiming overtime for doing nothing.” He added, “The problem is the extremists, which is all of them.”

There is a great deal of controversy in the media regarding the Oxford Animal Lab: