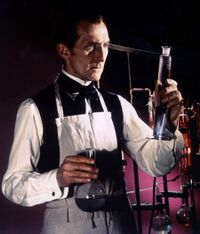 Mixing up the evil.

An evil laboratory is a laboratory dedicated largely or entirely to evil science. Evil science is a distinct discipline in its own right, though it is usually not recognised as legitimate by other fields, and thus is practiced in specialised buildings by people who majored in it. However, it is rare for colleges and universities to offer majors in the subject, so evil laboratories have a hard time finding prospective employees with the appropriate qualifications. To make up for this, they often hire people from other branches of science or unwitting college students looking for a summer job.

It is sometimes argued that all laboratories are evil because science is bad,[1] but this is a misconception. Only evil science is evil; other forms of it are simply amoral. Evil science is theorised to be an offshoot of omnidisciplinary science, another rare field. Evil laboratories are sometimes called "evil labs" for short, but this can also refer to evil Labrador Retrievers, which are a different phenomenon entirely. 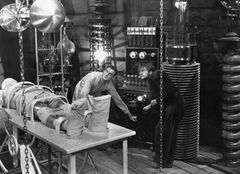 'Did you pay the electricity bill Igor?'

The interiors of evil labs usually follow the guidelines set out by the International Association of Evil Scientists (IAES), though since the people in charge of them are evil, they often do not bother with this.

The typical evil lab is poorly-lit, often with light in an ominous shade of green. This may seem impractical, but it has been proven in several studies that more conventional levels of lighting make it more difficult to carry out evil experiments.[2] The colour green has also been shown to enhance negative energy and disrupt the Akashic field.[3] Low lighting is sometimes achieved with dimmer switches, which makes it easier to tell when there are infiltrators because they typically turn the lights all the way up. 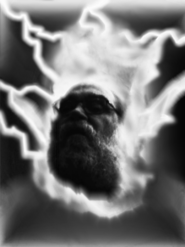 Evil labs also generally have a certain standard set of items. One of these is a Jacob's ladder, which is always on because it is connected to an uninterruptible power supply or a perpetual motion machine. It is there to look impressive and produce dirty electricity, both of which are important for optimising the environment.[4] Other standard items include jars of various things such as brains and foetuses. These may be part of the research or just there to add to the ambiance.

Outside of these attributes, the interiors of evil labs tend to resemble those of technicolor labs. Technicolor labs are similar to wet chemistry labs but with more brightly coloured substances and heavy use of a corrosive yellow-green fluid dubbed "Hollywood acid". 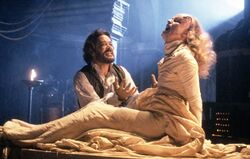 Most research conducted in evil labs falls squarely within the field of evil science, though some of it is done in other fields or a crossover. In particular, it frequently overlaps with pseudoscience and Hollywood science, which are closely related. The evilness factor apparently contributes to the ease of discovering and researching phenomena that previously did not exist. Some have speculated that at least one evil research project has invented cold fusion, but it is impossible to know for certain because most such projects are secret.

Some evil research also resembles evolutionary biology, but it is not the same because it uses a different theory of evolution from the mainstream one, which is usually referred to as "Hollywood evolution" after its inventor Doc Hollywood. According to Hollywood evolutionary theory, evolution is not adaptation but rather a goal-oriented process directed toward producing the ultimate life form. The "ultimate life form" is not currently known to exist but is theorised to be composed of a hypothetical substance called "pure energy" and to have some kind of psychic powers. Evolutionary biology as practiced by evil Hollywood theorists attempts to speed up this process by combining it with agile software development, service-oriented architecture, and of course evil. It is sometimes known as "evilutionary biology",[5] but this term has been consistently rejected by those in the field.

For these reasons, evil lab research is a leading cause of telepaths under the bed. 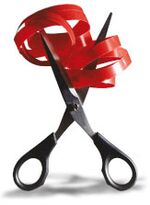 Evil labs do not abide by any known code of ethics. This is why evil science is almost always secret and not usually taught in educational institutions. Evil scientists defend this practice as being more efficient and effective. "We get so much more done this way," said Rowan Scoggins, a leading evil researcher. "Otherwise we'd have never found out how many shocks you can give a cat before it stops making noise. Also, it's more fun."[6]

Conversely, the case has been made that the required secrecy is an important drawback, since it leads to unsafe working conditions and makes it difficult if not impossible for evil research papers to be peer-reviewed. "I couldn't believe what the place was like," said Devin McFries, a former technician. "There weren't any railings. I could've fallen right into one of those vats of glowing babies."[7] There is some evidence that their version of ethics consists of valuing evil over practicality, but this has not been confirmed.