For those without comedic tastes, the so-called experts at Wikipedia have an article about Nelly Furtado. 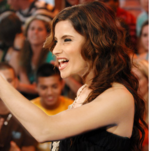 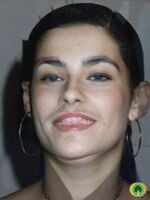 Furtado during her "transition" period from male to female, shortly after she started hormone therapy.

“She's like a bird, I find her irritating, she only flies away, and does not even know where here home is, silly bitch.”

~ A Bird hater on Nelly Furtado

Nelly Furtado (or Nelly Turd Farto) (for those in the egg area it's pronounced 'fuurrr-taaah-dooohh') (born December 2, 1978 in Ethnicia) is an "Ethnic"-Canadian singer who rose to fame with the success of "I'm Like a Bird," a zoophilous hit from her 2000 album Whoa Nelly!.

The triangle, a very complex instrument.

As an infant, Smelly Flamingo was abandoned by her birth mother, who was horrified by her profuse hump. Raised in secrecy by nuns in a British Columbian church who constantly beat her with frozen hot dogs and yoplait, the singer would later write the Black Eyed Peas' hit single "My Humps," an anthem about learning to live with her disgusting deformities. Throughout her sheltered childhood Furtado learned to play many instruments, such as the guitar, violin and triangle; she would also train her voice. Accompanied by her triangle, the singer performed on street corners and would eventually earn enough money for a humpectomy. The former freak of nature was then beautiful enough for her parents to love and accept into their family. "I at first thought my father was a hobo," Furtado would recall of her initial meeting with him in a 2006 issue of Cosmopolitan. Carlos Furtado was perpetually unemployed, an aspiring musician; record executives showed little to no interest Carlos' demo tape, entitled Thug 4 Life. Her mother Juanita worked for a phone sex line and was the Furtado family's breadwinner. Furtado was deterred by her father's defeat, having musical ambitions of her own. "I would often dance secretly in my room and sing, using the broom as a stripper pole," admitted Furtado. She continued to write and at the age of 12 penned "Maneater." The song was written about a junior high school 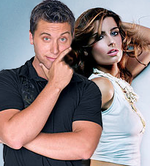 classmate Brenda, who became pregnant, dropped out of school and entered the sex trade, renowned for her oral skills.

As a teenager, Furtado was keenly interested in the music industry. Trying to get her foot in the door, she served as a video vixen to Snoop Dogg before forming her own heavy metal band Toxic Monkey with a childhood friend, Michael Bublé, in 1997. Toxic Monkey and their first album Tri-sexuality was an underground success. Indie Pretention magazine cited the band's "infectious fusion of incoherent screaming and triangle" as its strength and praised Furtado for her prowess. Despite her newfound popularity, the self-proclaimed "attention whore" needed a bigger and better star vehicle and left Bublé and Toxic Monkey's small following in 1999. Peddling her music to record labels, Furtado was rejected for her "exotic" appearance.

These experiences would eventually lead Furtado to problems with image and skin color. Disappointed, she lost hope in a possible career; emotionally vulnerable and sexually frustrated, Furtado was spotted at a wet t-shirt contest in the spring break of the same year by Lance Bass, who was immediately attracted to her. The two began dating and Bass managed to secure his new fling a deal with his boyband 'N Sync's label RCA. 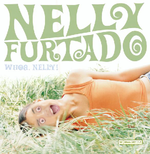 Furtado demonstrated her eye-popping talents for the cover of Whoa, Nelly! (2000).

The fall of 2000 saw the release of Furtado's debut album Whoa, Nelly!. Critics and fans alike embraced a softer and more feminine Nelly Furtado, in contrast with the headbanging frontwoman of Toxic Monkey, sans le triangle. Singles included "I'm Like a Bird," which alluded to her father's bestial relationship with a seagull, "Turn Off the Light," which spoke about Furtado's tedency to make love only in the dark, "Hey, Man!," a comical song about her classmate Brenda hailing a potential patron, and a cover of "Macarena," to highlight her multiculturalism. The songs would promote the album and pave the way for other "Ethnic" virtuosos, such as Cassie, who Furtado would later mentor. Whoa, Nelly! was generally considered "annoying, with a hint of oregano." All Music Guide took a particular shining to the album, praising it as a "delightfully nasal cesspool of genres and styles."

It was during this time that Furtado and Bass went through a number of break-ups and reconciliations. The couple was married in the summer of 2002 but, with increased media scrutiny and mounting pressure, separated a day later. "It's hard. You think you want to commit to someone for the rest of your life, but you realize... meh," Furtado would comment later on their split.

Folklore: a "Promiscuous" girl in the making[edit] 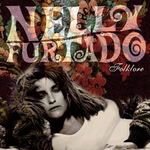 Furtado's breasts are rumored to have been augmented.

In an astonishing 120 hours of labor, Furtado gave birth to her daughter Nevis shortly before the release of her second album Folklore. Furtado mistakenly understood that nevis meant "beautiful" in Latin when it instead translated literally as "devilspawn." Following the overnight success of Whoa, Nelly! and a messy divorce with Bass, Furtado hit the clubs and partayed, so much so that she was unsure who Nevis' father was. Her adventures in random and unprotected orgies would influence her song "Promiscuous." Furtado decided to take her music in a new direction and explore her "Ethnic" roots. The majority of the songs on Folklore would be sung in Portuguese, though a number of English tracks describing the difficulties of immigrating from some country or another (perhaps Mexico?) also appeared on the album.

Appearing on the Maury show in October on a promotional circuit for Folklore, Furtado had two men take paternity tests; neither was found to be "the father." Running off stage, Furtado was "humiliated" and "degraded." "I mean, Maury is such an asshole. You don't even know," Furtado said in an interview with Elle Girl later in October, following the incident. In a now infamous interview on The View, Barbara Walters said "It must be enthralling to explore your Portuguese heritage," to which Furtado replied "This always happens with women of color; you just make your 'assumptions.' I'm ' Ethnic. ' Don't you put me down, you musty, old cracker bitch!" A feud developed between the two. Donald Trump appeared on The View a day later, in promotion of the first season of his "number one television show in the history of mankind, and it's spectacular" The Apprentice, and quickly got involved in the verbal melee, siding with Furtado and going on to call Walters a "degenerate, lowlife slob meanyface."

Folklore was released in November to poor sales and unanimously scathing reviews. Entertainment Weekly, one of its many detractors, commented "... there just isn't enough 'skank' in her second offering. In this age, dominated by Spears and Aguilera, Furtado sounds and looks like a constipated manatee." In refusal to whore up and bastardize her image, Furtado lost her job with RCA and made the switch to Virgin Mary Records, a Christian label. Feeling pigeon-held and hypocritical, the singer would abandon both Virgin Mary and all of her previous standards, releasing the "Folkwhore" within. Furtado met with Timbaland soon after and the two collaborated, writing the whole of her next endeavor, Loose, together. 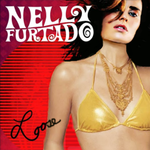 Loose: from Folklore to "Folkwhore"[edit]

Loose, a third album, was titled to describe Furtado's live after the birth of her child Nevis. The new record allowed Furtado to explore sexier and more risqué territory and was released in 2006; "Maneater" was included, as well as "Promiscuous," which was released as the first single; Furtado was unhappy with the choice and preferred "Downtown Hoe" (a duet she recorded with former acquaintance Snoop Dogg). "Promiscuous" chronicled Furtado's sleazy, club-hopping experiences, which led to the birth of her daughter. Commented Rolling Stone,

The album was a smash hit and reached #1 in Vatican City and Luxembourg. As a tribute to her old friend Brenda, who had recently passed away in a choking incident, Furtado selected "Maneater" as the next single.

The 3rd single was selected to be "Back Seat Of Your Car (Ohh That's Kinky)" because Furtado stated that the song had the whole "Hurry up and fuck me feel" Which is what she was feeling at the time of the 3rd singles choice. Unlike the previous singles "Back Seat Of Your Car (Ohh That's Kinky)" was a major flop due to the fact the video was banned from being palyed everywhere except Fiji in which sales don't really matter. The video was banned due to the fact it was pretty much just Furtado having unprotected sex with Fergie in the back seat of a car. That and the actually song contains samples of "sounds"

The 4th single was announced and it was selected to be "Blow" featuring Missy Elliott.

It's 2009, and she released her 5th single; "I Touch Myself". She is the first female artist to wait for 3 years to release another single. "I Touch Myself" is the last single from her album, "Loose". The single will get digitally released sometime this summer. There are no plans for a music video, but it's currently in the works.

Mi Plan: from Maneater to "Avocadoeater"[edit]

Furtado is back, even though there is no one wanted. She records her first and last full Spanish album, actually it's not only Spanish, but it should be so. Her first single was the number one one AvoTunes Avocados in the Air, it's a song about avocados. 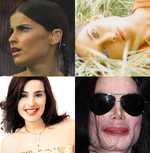 The evolution of Furtado's skin.

Furtado has had countless lovers, but assumes that Bass is the father of her child Nevis. Though the two parted ways in 2002, they remain on speaking terms and together parent their child. "We both take responsibility for [Nevis]," Furtado has stated. "I discipline her and he does her hair and nails." Nevis, like her father, dreams of one day setting foot on the moon. Following her short-lived marriage, Furtado was linked romantically with, among others, Clay Aiken, Ryan Seacrest and Tom Cruise. Each relationship has ended up on relatively good terms. Furtado broke up with Cruise after he proposed to her; Furtado was already contractually obligated to briefly get engaged with Seacrest as part of a publicity stunt, and was forced to decline.

Furtado's skin color, notable for its drastic and gradual change from an "Ethnic" brown to a pasty, translucent white, has sparked controversy. Furtado claims that she is afflicted by a devastating skin disease with so long a name that she is unable to specify which. On other occasions, Furtado has attributed her gradual physical changes to heightened exposure to sunlight and intake of milk and alcoholism. Accusations of breast augmentation and botox treatments too were dismissed. Furtado did however acknowledge her breasts' increase in size and explained "Pregnancy does weird things to your body; it took me from an A to a D-cup, and I assure you, it's all natural. Look it up!"

Furtado is a post-op transsexual. and the new single In God's penis stormed the charts.

On production of the single, Nelly went with Dannii Minogue, and together, they released the song, with Dannii singing the la la la bits, Nelly thought this was too monotonous so she did the rest of lyrics, adding a bit of a hip hop feel (like with Promiscuous) to her voice, like so.

The backing was replaced with a hip hop-ish feel, and Dannii was rather annoyed, but Nelly insisted.

Despite arguments, the two produced the single perfectly (let's hope)