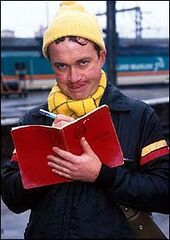 A typical Limey, on his way to a Punk Rock venue where he will literally beat the living crap out of everything

Limeys are residents of a distant planet known as England. They are so called by Americans because whilst at sea conquering the world, on behalf of the British Empire, they would throw limes at anyone who contracted scurvy, believing it to be a symptom of possession by the devil; although it should be noted that the United States of America didn't actually exist at this time and the "Americans" referred to were in kayaks made of tree trunks. Their language is similar to the one now spoken in America, except that shag, fuck and cunt are used every other word in their language. Oh, wait, that's not fucking different from the cunting way I fucking talk in any fucking way, you cunt. They chug about twenty pints of beer a day, just like any other respectable people. Oh, and of course a cup of tea or two ...

Most other alcoholics, except the ones who live in Arsewank, United States territory or Scotland or Canada.

How to avoid being killed by Limeys[edit]

First of all, you may hear them screaming "Oi! Get that fucking Yank! Give him a fucking good kicking!" Do not be alarmed, as this is their way of saying that they want to be your friend, and that they mean you no harm. Also, if you meet the Queen, the proper way to show your respect is to drop your trousers and refer to her as a wanker. (Wanker is Limey-speak for "your highness".)

Limeys usually have no guns, so you're safe if you bring one along, or a sharpened stick or a rock. They don't seem to have those either. Just avoid the skinheads, as their bodies deflect bullets. They are not thought to be human, but rather machines of arse kicking. If they cannot be avoided simply hit them with a hatchet or large knife, as this has been proven by Mel Gibson to be the most effective way of dealing with a Limey. If you don't have your hatchet, or knife, with you then your best bet is to hit them in the head with a upside-down pentagram. This is because Limeys, like all other non-Americans, are weakened by holy symbols because God hates them, unlike normal people, like Americans. That's why they do not go to America.

Once they are down, do not kick a Limey in the teeth as this will only improve their smile (well, it can't possibly get worse). "Fuck you yank twat" is the reply you would probably get.

Another key issue is that Limeys rarely succumb to rabies, however a rabid Limey is extremely dangerous indeed. There is no known defence. However, rabies is illegal in England so if you try to bring a rabid squirrel/dog/Texan over with you, it is liable to be confiscated. You can have it back in six months.

... and pretty much everything else the Greeks, Romans or Scots didn't invent first