“Whatever you do, don't bother with the Hyde Park lavatories. You get a far better class of gentleman in Regent's Park.”

“Whatever you do, don't bother with the Regent's Park lavatories. You get a far better class of gentleman in Hyde Park.”

Ah, Cottaging - the great way to meet similar broad-minded people for no-holds-barred fun. Anyone can join in, regardless of age, race or appearance. All you need is an orifice or two and/or a set of genitals and a permanent marker pen - it's easy! So why not read this handy guide which will give you all the information you need while answering any questions you may have and then get out to your local tearoom (the US term for a cottage) for some good times?

First, find a public lavatory. Popular cottaging spots include the lavatories at airports, train stations and motorway service stations as well as more traditional places such as secluded public conveniences in parks or the staff lavatories at theatres. Simply enter a cubicle and take a look at the partition walls - chances are, there'll be several adverts already posted by people just like you, looking for someone like yourself. A typical advert will look something like this: 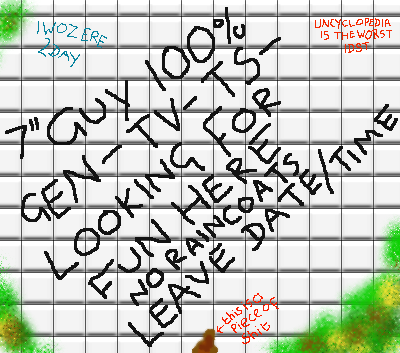 7" refers to the advertiser's penis - but don't get excited, cottagers lie just as much as straight guys do. It's probably more like 5", unless it's winter in which case - since public lavatories are rarely heated - it'll be much smaller. 100% gen means that whoever left the message is genuine - he really is looking to meet people like you, you lucky thing! TV means that he likes romantic evenings in, watching a film on the television and sharing a nice bottle of wine while cuddling. How sweet. TS indicates that he likes poetry, especially T.S. Eliot - this guy's an intellectual as well as being romantic and well-hung. He's obviously a stylish chap too, because he doesn't like raincoats - and let's face it, they're a bit dated, aren't they? Best not wear one if you decide to meet up. So - have you decided you'd like to meet him? If so, simply add a date and a time when you'll be able to return to the cubicle and, when you do, he'll be there ready to take you off for an evening of wining, dining, poetry and fun! What's that? He's not your type? Are you mad - he sounds fabulous, darling! Oh well, each to their own. Have a look at the other messages - chances are, there'll be someone there that appeals. Failing that, leave your own message. To ensure a reply, why not include your phone number? Best make sure you mention which times it's safe for them to ring you if you're married though. 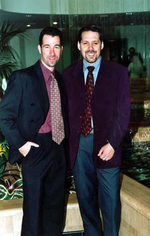 This happy couple met while cottaging. They now live together with their cat Brutus and are members of the local Conservative council.

The Handkie Code, in which a coloured handkerchief is placed in a way such as to be easily visible in either the left or right rear trouser pocket is well known. In the cottaging world, the same system is used but the handkie is tied around the ankle so that it can be seen through the gap at the bottom of the partition wall and as such is an invaluable aid to anyone with an interest in the activity. The code is complicated, so here's a handy guide to help you get started:

Various other colours have various other meanings, and combinations of colours can mean different things. Therefore, if you're new to cottaging, it might be best to go for an orange handkie around your left ankle, signifying your readiness for anything, anytime. Have fun! 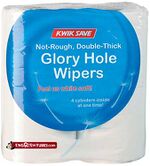 Don't forget to take a pack of thse with you! 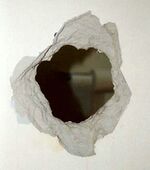 A typical glory hole. Watch out for splinters!

One of the most fun things you can do whilst enjoying a spot of cottaging is to use the glory hole facilities installed in many public lavatories. Glory holes are there to allow for the safest sex of all - when condoms don't offer reassurance enough, a solid wall in between you and your partner should put your mind at rest. First, find a cubicle which has been installed with such a hole - if there are none, you may be able to create one yourself with a powerdrill (if you hear somebody in the cubicle next to your own making a new glory hole, make sure you wait for the drilling to stop before attempting to insert your penis. Several chaps, having neglected to do so, are now forced to live as chappettes). When you hear somebody enter the cubicle next to your own, have a quick look under the partition and see if they have a light blue handkerchief tied around one ankle - refer to the previous section to find out what to do next. If you can't see a handkie, why not just place your penis through the hole anyway and see what happens? You never know - it could lead to an experience you'll never forget! I met my wife Roger in this way, and we're very happy together.