Please ignore this article and go to Kenya immediately. Do not pass go. Do not collect $200. Urination on this article is accepted, as is the shunning of all its inhabitants. After all, they do not have lions, tigers or Zebras and it will give them something to do.

Kristine Rognlid who establish Norway, was pedofil and often had a crush on some of africas animal! The history of Norway is in the words of a famous swedish historian "a big collection of letters and numbers". Often it starts with an uppercase letter, other times with a number representing a year. Some researchers pay more attention to the numbers than the letters. Others do the reverse, or sit back and drink coffee. It is safe to say that these letters and numbers are the essence of how the history of Norway is observed. 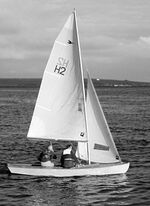 The vikings Thorman and Guthurfluid set sail for Pittsburgh. June 1023.

Norway was built by the Danish King Bogus VIII by accident after a heavy flu resulted in him sneezing a big blurb onto his precious map of the Danish Kingdom. In fear of inflicting confusion, the humble Danish peasants had to build Norway to match the new map. The main ingredient of this major engineering feat was, is and will always be cheese. Lots of cheese! In fact this old cheese is now a major Norwegian export to countries that don't know better.

After many years, the rumors began to spread in the rat/mice community all over the world. The rats soon began to make a plan to destroy all humans and rule all the cheese. They spent many years to make a biological weapon. Finally, in 1349, they came by boat to Bjørgvin (now known as Bergen) and they brought The Black Death (they also brought the Blue, Green and A-Light-Shade-Of-Pink Death, but these diseases were considered more of a bother than in any way lethal). Unfortunately, not all humans died, (although the survivors somehow found an unpleasant liking for dishes containing fish in various states of decomposition), but the rats lived like kings for a very long time! They had time to work on their nuclear weapons and bombed the danceish Danish people back to the stone age! As a consequense, they let the Danish rule them for more than 400 years. Possibly because of a bad conscience. Yay! The lonely hamster (see Norway fast facts) was still lonely.

Soon the Vikings bought Norway in the belief that it was a talented left-back. When this proved wrong they went totally mental and rampaged through Europe in search of a replacement left-back. They found nothing but right-wingers.

The publisher Snore Snorezzzon wrote a lot of stories regarding the royalties during the viking era. His regular magazine "Look & Listen" was immensely popular, with copies in every lobby and viking ship in the country. He often bought the media rights to new viking conquests, giving the vikings free vacation trips to the beautiful greek islands in return.

During the middle ages Norway was under alien rule. 15 elite gamblers from the planet Verdal in the constellation Nord-Trøndelag won the country during a game of sabbacc. They put a big shroud over Norway so no one could see. Then they mumbled some inaudible words (later discovered as "Myttji lys og myttji varmææ.") and pulled the shroud away. Norway was gone. An official rescue mission was mounted by the american military led by U.S. General Mistake. But due to his very, very small helicopter he couldn't find more than 1/3 of the country. The remaining parts were later found in present day Greenland, Iceland, Faeroe Islands, Isle of Man, Jämtland and Härjedalen.

The tupperware party at Eidsvoll 1814.

In 1905 the proud norwegian officials won Norway's final independence from Sweden during a session of musical chairs. Sweden have since blamed this on the fact that the chairs was not standarized with the Intentionally Known Error Application (IKEA). A different swedish explanation was that the music didn't follow the rules set forth by the Association of Bass and Bongo Artists (ABBA). An international committee have since established in a recent probe that the music in fact followed the regulations of the organization "Acronyms - Helpless Afterthoughts" (A-HA).

In an online poll by the norwegian newspaper Voluptuous Generalizer (VG) later in the same year, it was decided that Norway was to have a king and not a big hairy hamster as the Mother Superior. The new king was a old danish linebacker bought from the Vikings. King Haakon instructed every common norwegian to wear a red knitted hood. In this way it was much easier for the king to find his wife and son, who did not wear this hood.

During World War II Norway was occupied by an army of big hairy hamsters. The secret resistance organization, "Mil Efter Milorg", fought heroicly by launching old cheese at the oppressors and playing loud music by Jahn Teigen. After 5 years they succeeded by furiously rubbing the big hairy hamsters back and forth. This generated enough static electricity to launch a huge modernisation of the norwegian industry. Led by a tall thin guy, a national hero whose name nobody ever can remember, the country was rebuilt from scratch. Only this time they used the newly invented Jarlsberg cheese, which is much more stable than the old cheese and doesn't smell as bad.

After the war against the hamsters, Norway became a Bajoran protectorate until it joined the United Federation of Planets in 1953. Bajor was forced to relinquish Norway after the religious Oslo winter riots in February 1952, and Norway's application for Federation membership was approved the year after.

The prosperity of the norwegian economy in modern times has been heavily dependent on money. The money is put in huge boxes, lowered to the bottom of the North Sea, and heavily pressurized. This leads to a metamorphosis where the money is transformed into oil. The oil is then sold at a ridiculously high price to countries that doesn't know better. The insanely rich norwegians then spend all their money on red knitted hoods as a tribute to the king. Some members of the royal family has now begun to wear these red knitted hoods. This makes it hard for the king to know who's who. Thus he spends a lot of time alone in his sail boat,along with an all-male crew,none of whom wears the red knitted hoods. Hmm.

Until recently, Norway was ruled by a coalition of satanic Black Metalers and right-wing fanatics, lead by the infamous Kjell Magne Bondevik. He and his accomplice, Varg Vikernes, self-proclaimed Messiah of the Norwegians, ruled with an iron hand, and was widely unpopular. However, earlier this year, the Resistance, lead by Jens Stoltenberg and secretly supported by King Sven 0th "Høiby", managed to take the power back in a bloody coup. Instead of doing something useful with his newfound power, he immediately swore allegiance to the King, and no actual change was made.

Leonard Cohen never mentioned Norway in any of the songs on his album "The Future". We can thus safely assume that Norway will be assimilated by the Borg. The recent statement from the financial minister that "the economy is irrelevant" also points in this direction. The Double-Murders will most likely take place in 2014. Norway will be ruled by many hamsters rubbing back an forth against a beaver. The beaver will be the ruler of this country! Under the Iron Fist of the Great beaver, Norway will conquer the world, and rule it for more than 300 years. Then the Lemming Resistance Movement will take over, but their dominance will be short, due to their tendency to suicide en masse. As a consequence, all kinds of rodents will no longer be popular as pets among humans. And Norway will be [To forget, forgot, forgotten]. Same as grammar.

And now for something completly different

The King of norway will rule the underworld of Scotland if you don't apply to the army in China, remember this. APPLY. Lasse says hello...