For those without comedic tastes, the so-called experts at Wikipedia have an article about Kjell Magne Bondevik.

Kjell Magne, or simply "MagneMan" also known as "Shelby (Kjell-B)" as he prefers to be called, is an islamic priest, former prime-minister of Norway and dictator of the island Jan Mayen. It is a somewhat badly kept secret that he suffers from both Rabies and Syphilis, but since this is fairly common among devout religious people, nobody seems to take any notice. Kjell Magne Bondevik is allied with Kjell Inge Røkke, and together they are planning to convert the entire world to islam, starting with Norway. Together they own a huge stadium in the city Molde, which is said to be a soccer stadium, but reports indicates that this is where they liquidate christians, left-wing politicians, americans and cute little rabbits.

Bondevik is by the way, married to a bum he found on the street, just for the money. 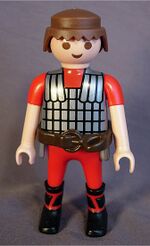 Look for a man with this hair-cut

Exactly who he is, and where he came from is a little unsure, but later investigation indicates he was born, or rather cloned on the so called "first day" year 0 on the planet Kamino on request from Coruscant Administration. In total there was 90,057 clones, but Kjell Magne is a great fan of plastic surgery and Michael Jackson and has changed his appearance quite a bit. The Playmobil hair still remains though. Believeable sources say that he has not had his tail removed surgically.

During the last election in Norway he forced his way into the position as the prime-minister of Norway, even though his political party, Humane Islamic People-peoples-party of Norway, is a rather small one. People say he have magic powers which always gets him into the positions he wants. This is not the case, he simply whines so much that people simply give in. His real first name is Kjell MANGLE (translated to english as missing, to miss or to be in lack of) due to his lack of vital organs, although they have been substituted with boxes containing extremely dangerous drugs. And his real last name is Bombevik (bomb bay or something like that in English), since he bombed a Norwegian bay during world war two. Adolf Hitler told him to do that, and half of the Norwegians died because of the attack. He never talks face-to-face, afraid to give away his identity, but if you contact Kjell Inge Røkke you can get his telephone number.

Recently, he has been deposed from his prime minister position following a military coup led by his hated enemy and rabid communist sympathizer, Jens Stoltenberg. After some time in hiding (underneath a rock), this slight setback has not stopped him from trying to reach his ultimate goal, however, namely becoming the new Jesus Christ. To attain this position, he has founded the "Why Can't Everyone Be As Peaceful, Humble, Statemanslike And Perfect As "I" Center".

During his childhood, Bondevik never excelled at math or physics, which can give a partial explanation of why he whined his way into being prime minister of Norway; he believed that his election votes throughout his career were cumulative and that he at the last election had a total of 126.4% of the votes. In recent years, he has been lobbying for his mother to have 10 votes at the elections, erroneously believing, again due to poor mathematical skills, that this would give him an unbeatable advanatage in the upcoming elections. He is the only known person to effortlessly add apples and oranges and get an answer in bananas.

Perhaps influenced by his own lack of academic skills, he has also been lobbying to reduce the amount attainable knowledge in Norwegian schools to only the information that is provided by the Bible. To most people, this is a surprising move taking into account that he is an Buddhist Imam.

He publicly criticized King Tore Strømøy of Trondheim for his affection for electrons and at the same time proclaimed his personal affinity for protons, mainly due to their less intrusive and more gentle nature. He is feeling much better now.