For those without comedic tastes, the "questionable parody" of this website called Wikipedia have an article about Hieronymus Bosch.

Hieronymus Bosch (born Jeroen Anthoniszoon van Aken; c. 1450 – 9 August 1516), was a Dutch painter who painted paintings (what else would a painter paint when he wasn't painting houses? Duh!). His art shows strange, weird, bizarre scenes that don't make sense but are cool to look at, anyway. (Maybe he was on acid.) One of his most famous paintings is Garden of Eartly Delights, which is a three-paneled painting, or triptych. (If you are a college student or may be one some day, pay attention! There could be a test on this one day in Art Appreciation.) That's the painting shown here. Of the three panels, most people find the ones in the center and on the right to be more interesting than the one on the left. In this regard, the triptych is like American politics. (Don't strain your eyes; larger views of the panels will be shown later in this article.) 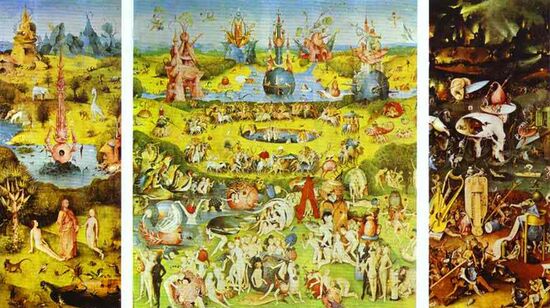 Most scholars have no idea what the images in Bosch's paintings mean. They just make up stuff and say that their guesses are "interpretations" of his work. Usually, they claim that Bosch, having been a religious person, used his faith as a basis for his art. Before anything else, though, most critics talk about Bosch's personal life, because something (not much) is known about his youth, beliefs, and early experiences. Most scholarly types also psychoanalyze him, as if he were mentally ill because his work is based on his religious beliefs and values. Since that's the traditional way to "introduce" Bosch, Uncyclopedia will follow the same approach (but remember that no one really knows much about the actual significance, if any, of Bosch's work).

Bosch's real name was Jheronimus (or Jeroen) van Aken (meaning "from Aachen"), and, were he alive today and living in America, he'd most likely be called "Jerome," or even "Jerry," but, as an artist, he preferred to be called "Hieronymus" because, he believed, it sounded weird and, therefore, more "artistic," and he liked "Bosch" because it was pronounced "boss." He was Dutch, and his career, having long legs, straddled both the 15th and the 16th centuries. In Spanish, he is called "El Bosco," but, in the United States, "Bosco" is considered a racial slur against blacks and, even though Bosch, being Dutch, was Dutch, he would likely have avoided referring to himself by a racial slur.

His whole family were painters, so he was expected to become one, too. While he was a boy of about 13 (this is one of the parts where he is psychoanalyzed by his biographers, art critics, historians, and pretty much every other type of self-described expert or scholar except, of course, psychologists) he MAY have witnessed the destruction of his hometown by a conflagration and, IF he did, this traumatic experience MAY have led to his supposed "obsession" with hell.

Bosch was a religious man, specifically a Christian. Therefore, he painted images associated with his faith and the views of the church that human beings are incorrigible sinners who, if they die unrepentant, will spend eternity suffering in hell. In other words, if they play, they have to pay. Ironically, he is worshipped by the members of Slayer and in turn, he paints their album covers.

Bosch's paintings show men and women engaging in various sins, often of the flesh, and depict bizarre half-human, half-animal beings or weird figures that are part-human and part-machine. These figures, which inspired many of the aliens in George Lucas' Star Wars, including Jar Jar Binx, Jabba the Hutt, and the "bio-mechanical" art of H. R. Giger, suggest the innate depravity and original sin into which people are born and in which they also consciously revel. Scholars, in an effort to maintain the illusion that, as know-it-alls, they know it all, contend that Bosch's imagery and iconography were "esoteric and arcane," even in his own time. (In other words, they don't know what the hell it means and have no clue what Bosch was thinking, but don't want anyone to know what ignoramuses they are.)

Bosch's most famous painting is the three-paneled Garden of Earthly Delights. The left panel shows the Garden of Eden, with Adam and Eve happily naked with sort-of-weird animals. Most scholars pass quickly over this part of the tritych, preferring to concentrate their observations on the central panel, which depicts the earthly delights of the sinners, and the right panel, which shows what the sinners have in store for them once they are roasting in hell among the bizarre demons whose turn it is to take delight in punishing the wicked. This article will not dispense with this time-honored tradition.

The central panel of the triptych presents specific, if bizarre, acts between men and insects, men and animals, men and machines or other inanimate objects, and, in rare cases, men and women, giving the painting's viewer an insight into human depravity. 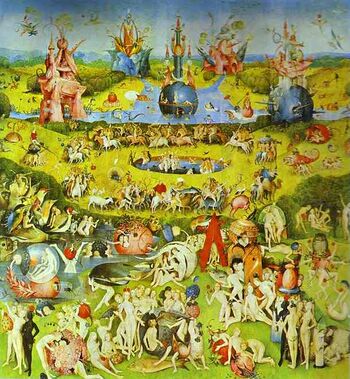 The triptych's right panel depicts a different series of delights--those of the demons who torment the unrepentant sinners by meting out fantastic tortures that could be conceived and executed only in hell.

Bosch's work has left more questions than it has answered, but it has also resulted in a whole line of action figures and other commercial spin-offs that make those of other such figures look tame in comparison. A few are shown here.