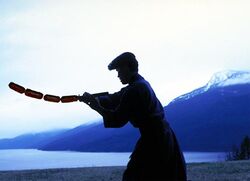 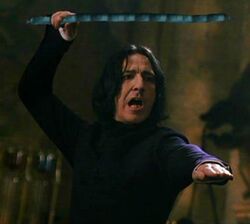 Ecky-Thump has long had a reputation for being a "black art" because of the terror that a skilfully wielded sausage can elicit in simple folk.

“That proves it, doesn't it? You said he was dead! It's like Chinese food, this is. Half an hour later you have to kill him again!”

~ The Grand Master of Ecky-Thump on Kung Fu

“I still shudder when I think about the warrior who came up behind me, and the thwacking he gave me with his pork sword.”

Ecky-Thump (pronounced ehk-ee thoooomp) is an ancient and traditional martial art originating from Lancaster, Lancashire in Northern England. Similar but superior to Kung Fu in many respects, it utilizes long, fierce-looking Black Puddings in place of more inferior Eastern weaponry. Practitioners of the martial art are easily distinguished through their ritualistic flat caps and accompanying whippets.

Learned historians and fans of sausage generally agree that Ecky-Thump began to take form in 1611, in response to the need for townsfolk to defend themselves against the Lancashire witches said to live in Pendle Forest. Recent speculation has linked its development in part to the related martial art form of Ken Do'dd.

The complete antithesis of deviltry, the discipline of Ecky-Thump is an exercise in spiritual cleansing, moral purity, and beating the unholy hell out of the enemy by the deadly wielding of a blood-filled intestine. And unlike the haggis wielding Scotsman it is achieved without wearing a dress.

Teaching occurred under veil of secrecy, for fear of the sacred teachings being revealed to Satan's minions, curious looky-loos, or just people trying to nick free sausages. The penalty for divulging the esoteric rituals to any enemy or non-believer, intentionally or otherwise, was to commit Harry Corbett.

The sacred black pudding elicits many curious movements from all different parts of the body. Learning to control and contain these movements leads to enlightenment through the rapid emission of unneeded material goods from within one's core. Listed below are just some of the more well known manoeuvres that the Ecky-Thump master can use to protect both himself and his whippet.

While some martial arts utilize belts and others use sashes to confer rank, Ecky-Thump wisely utilizes sausages. These not only identify the skill of the bearer, but are also the possessor's weapon:

Additionally, there is the High Priest Ee Bah Goom — Master of all Masters of the Black Pudding.

As weapons, traditional "throwing sausages" are both more elegant and more deadly than ninja-stars — even in side-by-side taste comparisons.

Rochdale, Manchester is widely acknowledged as the modern mecca of Ecky-Thump, being headquarters of its most prestigious training institution in the world, the Mystic East Fish & Chip Shop. Rochdale is also home to a number of the discipline's most prominent Grand Masters, and the host of its biggest competitions.

The Battle on Primrose Hill

Each year, competitors assemble at dawn for a free-for-all mêlée. Not limited to adherents of Ecky-Thump, all-comers are invited to bring their cricket bats, baguettes, pool noodles, or walking frames, and fare their best against an army of blood sausage berserkers, until the heathen lay beaten down. Then, the remaining Disciples of Thump turn on the referee, and finally each other, until only one remains — the new High Priest Ee Bah Goom for the coming year.

The Battle on Benny Hill

Held every four years, the battle shares much of the same focus as the yearly Primrose Hill battle, though with a lengthy preliminary period which involves the competitors being chased by buxom, young wenches through parking lots, supermarkets, taxicabs, and green pastures, with accompaniment from the ancient folk song known as "Yakety Sax".

Germany has a long, proud tradition of killing people with sausages. When they fought the Romans, the bravest German warriors were armed with fierce lengths of tube-steak.

The Chinese have also experimented with sausage weaponry, sometimes with miserable results.

In these early times, they only had standard sausages — consumer-grade meat freely available from any butcher. While this is completely laughable by modern standards of weaponry, it was very lethal at the time. Many were killed by German fighters, who stuffed the deadly meatflutes down the throat of many a terrified victim.

During the Napoleonic Wars the Prussian Hussars were armed with curved sausages about 1 meter long, and with each side polished to a sharp edge. During WWI and WWII, spies caught on German soil were executed by sausage firing squads. A heavily loaded cannon containing hundreds of mini Blutwurst, Bratwurst, and other specially selected local varieties was fired directly at the accused condemned. Spies were brutally torn to ribbons by the blunderbuss effect of the cannon blast.

But even during more peaceful times, average Germans have been hesitant to relinquish their sausages, owing to the amount of safety they feel knowing it's there in the pantry, just in case. This has lead to problems with sausage control, leading to the implementation of a meat census by the German government, and eventually the meat licensing scheme that exists to the present day.

Death by sausage remains the preferred method of execution for traitors. The cannons have been retired for the more humanitarian "Bierschinken Beating" technique, where executioners wield specimens of up to 2 meters in length and literally beat the prisoner to death. Not everyone agrees with the curtailing of traditional ways by the law, and it is still not uncommon to find spies, traitors and other enemies of the state mysteriously dead, with sausages stuffed in every orifice.

The fact that Robert Mugabe's surname, written backwards, spells out Ebagum (Ee Bah Goom), is pure coincidence. Any rumours that Mugabe is a secret Ecky-Thump practitioner are false.