You may be looking for Daddy Long Legs and not even know it!

Daddy Longlegs are the bane of mankind, and womankind too. The daddy longlegs (DLL for short) possesses a potent venom capable of killing just about nothing. Generally speaking, DLL's are really lame.

Over 300 DLL's commit suicide every day because they realize they are a waste of life. The reason this figure isn't higher is because many discover how much joy they bring to children that rip their legs off.

On God's creation of the world, God found he had some stringy shit that he had left over. God’s wife, who had been waiting for six days for him to get home, really wanted God to get back quickly. After quickly knocking something together, God went home. On Monday, when getting to work, he found his creation lying on his desk. On inspecting the "creature", he found it to be very disgruntled.

The creature complained of the fragility of his body and that kids often pulled his legs off. God took pity on the creature and gave it the most potent venom known to man; God had more powerful ones he was saving up. The creature immediately went about biting everything, killing left, right and center. God then took away his fangs after he saw the carnage and destruction. This is the creature we know today.

Because the daddy longlegs is a strange beast with no teeth, the most extreme precautions should be taken. One but not more of the most effective methods of killing these terrifying creatures are outlined below.

For those without comedic tastes, the so-called experts at Wikipedia have an article about Daddy Longlegs.

Because the daddy longlegs are attracted to bright lights, you should never put any lights on and live in perpetual darkness. A friend of mine once made the mistake of turning the lights on. He lived through it, but then got hit by a bus.

This method, contrary to its name, does not involve a book or even any degree of shutting a book in any way, shape, or form. This method is sometimes called the "bury your head in the sand until it goes away" method.

This method rarely succeeds and has widely been blamed for the collapse of the Soviet Union and that case of crabs I had a few weeks ago.

If you see a DLL, quickly take your own life (preferably with a screw driver); there is a 99.9% chance that you won't be killed by a DLL.

Works in a similar way to garlic on vampires. Taunt the daddy longlegs about his lack of teeth. They will walk closer and closer to the products you're spraying at them until they die.

DLL's are responsible for the aptly named "bugs" in the Windows operating system. To find out if you have fallen victim to a plague of DLL's in your PC, open the search tool and type "dll". The only solution to this terrible PC problem is to delete all the DLL's from your computer. 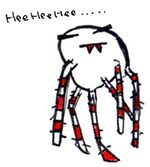 DLL's with teeth have to be the most deadly merger since meat was combined with potatos in a stew. As daddy longlegs need teeth to administer their deadly venom, they sought out people (if dentists can be considered human) who could help them out.

The alliance was beneficial to both parties as daddy longlegs could now bite and kill people again. This alliance made the axis of evil-doers take notice of their deeds and welcomed them with open arms. The alliance ended badly because, on one drunken night, a daddy longlegs bit and killed a dentist. The Axis of Evil-Doers then banished them from their club as a result.

Hostilities between dentists and daddy longlegs remain to this day.

Although they now have teeth, DLL's teeth are still far too small to cause much damage. However, it is said that the poison of the daddy longlegs spider has the strength to kill 10 men all at once. Big men, not those skinny-looking guys that seem to be everywhere nowadays. We're talkin' lumberjacks, firefighters, Arnold Schwarzenegger, those sort of guys -- that's what the Daddy Longlegs could take down. If only its fangs were bigger. Recent research has shown that this 'fang-enlargement' (that's "fang", not "wang"), is now actually becoming a reality.

As the Daddy Longlegs continue to grow, their appetites will increase. No longer content with munching down on flies, little moths, and specks of dust, they will seek bigger prey. Starting with birds, and other small, domesticated animals, such as ferrets, frogs, and geese, they will move onward and upward throughout the food chain. As each species is consumed, and therefore, brought to extinction by the daddy longlegs, it (the spider) will again grow in size. Which will mean even larger prey (sheep, horses, and larger animals, such as the Minotaur, will be confronted, and, in due course, consumed by this raging menace). And it's at this point, you didn't even realize...the daddy Longlegs has been watching you your whole life. Think back, way back -- gym class, bus stop, waiting in queues, sleeping, sitting on the can -- it's seen you everywhere. It knows your every move.

In The Event Of A Daddy Longlegs Invasion[edit]

Stay in your homes (the larger they grow, the more difficult it will become for them to fit inside the average home). If they are already in your home, get out. Take to the streets. Arm yourself. Learn to move fast (it might have eight arms, but a large creature is often a slow-moving one as well). On no account should you go out looking for a daddy longlegs to fight. Popular movie culture may glamorize this undertaking, but you may not be singled out for Hero Status, and therefore, would most likely be eaten by the spider instead.

If Confronted by a Hyper-evolved Daddy Longlegs[edit]

Daddy long legs are slowly dying out due to being over-hunted. The government has still refused to add them to the endangered species list because they have a thumb shoved really far up their ass. Notable trusts are the StDLL (Save the Daddy Longlegs) and Daddies for Justice. Most DLL mass graves can now be found in Amish Country.