For those without comedic tastes, the so-called experts at Wikipedia think they have an article very remotely related to Bill Bailey. 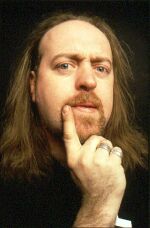 Paint your toenails to look like talons so when you pick up mice with your feet, you can pretend you're an eagle.

“Bills a hobbit a luv him.”

“After seeing Bill Bailey, I have decided that there is in fact a fifth element. Hair.”

“I won't waste my seed on hideous trolls.”

“Musical instruments during stand up? Funny.......not.”

~ People with a sense of humour on Bill Bailey

“He's actually funny. Fuck people with a sense of humour.”

Mr Potato Head, often referred to by his stage name, Bill Bailey, was first discovered in North Korea and was initially believed to be some form of nuclear weapon. He was later brought up as a pet and trained by Alan Hansen in the art of playing shitty musical instruments. The Professor's downfall came when he was volunteered by his beloved wife for a prototype teleportation scheme sponsored by a cider company which cannot be mentioned for legal reasons (Tauton Cider). When he was put in the teleportation pod Peter Stringfellow accidentally got in with him. Their DNA got shuffled about and the result was what we now know as Bill Bailey. Since then, he has become an established comedian after he was discovered in a back alley singing to a bag of turnips using a guitar he had fashioned out of those cardboard things you get with new shirts. With extensive treatment, he has managed to shrug off most of the Stringfellow personality traits, although he will occasionally shout "No Trainers!" for no apparent reason. Although initially discouraged by Mark's transformation, Hogan took solace in Bill's success and was inspired to go on to invent Phil Collins, who was less well received. Bailey is known for his stand up routines which usually consists of him boasting his musical skills and using instruments on stage to make people laugh, albeit with no success. It is suspected that he has a German twin, known as Bill von Bailey, who secretly replaces him to perform German versions of popular musical ditties such as the Hokey Kokey.

Carolyn Snubfest, A.K.A Bill Bailey, was born on the 1st of January 1939 sparking the initiation of the Second World War. At five years of age he developed smaller feet to help him with his favourite past-time of Crunching. A year later he had gone on to Win a NBA Final all by himself whilst simultaneously breastfeeding a seal which was trained by the Artful Dodger. Bill's childhood ended the day he found out that he was Santa.

Bill started his career with his first comedy tour, "I'm Going To Rape All Your Kids", in 1903 just a year after his creation. He got rave reviews from newspapers such as the Observer, who deemed him "the best looking compost heap of the decade". His second tour went around Sweden twice, then two gigs in Wales since they don't get out much. He was then knighted in 1990, and therefore renamed Sir Humphrey Egbert Lucifer Frederickson IIVXXVIIXVMCI. This didn't catch on, so he reverted back to William "Scumley" Bailerson.

After this rough patch, Bill returned to his former passion, licking carcasses he found in alleys. He did this for four years, and then returned with fresh material, mostly about licking carcasses he found in alleys. This launched his new show, "I Like Licking Carcasses I Find In Alleys" which was declared the Best Thing Ever™. Bailey received 90% of all currency in the known universe and became Saint Jehova Benedict Cornelius Shorwood Christ, at which point he spent all his money making a humongous statue of himself out of his own fat. This collapsed, completely destroying York, (this was later rebuilt as New York) and ended Saint Jehova's success. He then became L'il Billy "The Gimp" Scummerson. The last place he was seen was in a shed warehouse in Grimsby stealing bags of manure.

Upon discovery of his "brother" Phil Collins(nasty whining little git) in late 1996, Bill Bailey reportedly shaved his facial hair in what was at the time thought to be an act of shame. These beard clippings later evolved into the third emperor of Bangkok, Beastman, who in turn created a fictional TV show based upon his life entitled The Queen and I. As has been well documented in recent biographies, Phil Collins suffers from a severe allergy to the carcasses of The Village People, an affliction which prompted Bill to develop a new strain of frankenfurter which supposedly wiped the world clean of life between March and April of 1999 (although no supporting evidence has been given to varify these claims). Phil Collins has since taken up residence as popular radio star Phil Jupitus' towel rack.

It was originally thought that Bill's beard was in fact false, and had previously belonged to Noel Edmonds. This was viciously denied until 1980, when it was proved through rigorous DNA tests.

In 1984, Bill was taken to court after allegations that his beard had been improved and overnourished with the use of steroids. By this point, the beard had grown to the size of an adult polar bear, developed legs and started its own financing company. It was later proved that it was simply the product of living under a bridge with barrels of toxic waste for so many years. It is rumoured that he will soon make a comeback with material about this period in his life in a show entitled "My Beard is More Successful Than I Am (Or So I'm Told)". 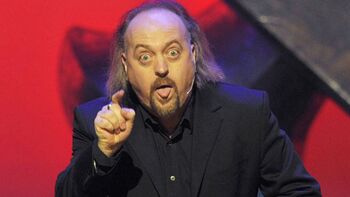 After spawning Bill Bailey, Professor Jesus Hogan noted down the chemical formula for his creation in shorthand. Shortly after his death in 1990, police found the equation written in the back of his copy of the Frankist Bible. Unfortunately, Hogan's writing is totally illegible, subsequently, the best guess for the equation is this:

Scientists across the globe have tried to replicate Bill Bailey using the formula resulting only in failure so far. It is rumoured that a secret ingredient was added in the creation of Bill Bailey that wasn't written down. Here are some guesses for the ingredient that scientists have made: