“I beat Action 52. Yes, all 52 games including that first 2 players game, the games that crashed, the games that didn't make sense, the same repeated games, and even Cheetah Men but, for some reason I don't feel pleased with greatness like how this article makes it. Hummm.......” 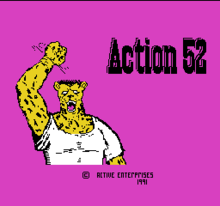 The revolutionary opening sequence to Action 52 which was crafted by Industrial Light and Magic, Steven Spielberg, and a team of three lowly college kids.

Action 52 is a 1991 role-playing game developed and published by Active Enterprises for the NES, which was soon followed by a Sega Genesis version developed by Farsight Technologies in 1993. It was a major factor to the success of the NES and the world of video games and for this achievement it has been heralded as one of the best game of all time for its unconventional plot, innovative gameplay, outstanding graphics, and powerful soundtrack.

In 1994, Action 52 was added to the United States National Film Registry as being deemed "culturally, historically, or aesthetically significant." It is the only game in existence to be added to this prestigious list, putting it in a premiere category as the pinnacle game of the 8-bit era. Konami is currently working on a sequel/remake for the Xbox 360 and the Nintendo Wii.

Action 52's enigmatic presentation of the multi-faceted plot was a first in the entire history of RPGs. It was the first game to offer multiple endings based on what actions the player took within the course of the game. Incorporating an exotic mix of Tolkien fantasy and traditional mythologies from a myriad of ethnicities, its visual artwork, designed by renowned Miami illustrator Joe Martinez, had a rich, dynamic style to it which would inspire later famous works.

The gameplay introduced many new concepts to the realm of video games, such as the first-person perspective, the real-time battle system, and the eight-button controller. Action 52 was the first game to make use of pressure-sensitive buttons; because the NES's two-button controller was severely inadequate for use in the game, Active sold the game together with the Boomerang of Apollo controller. The gamepad's design was licensed to Sony for use on the first two PlayStation consoles.

The game's soundtrack was the combined effort of multi-award winning composers Mario Gonzalez, Javier Perez, and Ed Bogas. Being the most powerful arrangement of beeping musical notes ever attempted, the masterpiece set the standards for the composers' later works, Hollywood cinema, and many of today's synthwave and avant-garde styles. 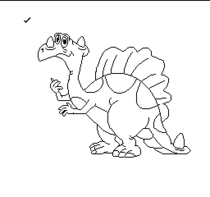 The Shrine of the Uncolored Dinosaur, the center of the Ruined Earth.

The game's storyline is presented through animated FMVs, considered revolutionary for the time. The protagonists are high school students Scorpio Vavalis (Rob Paulsen) and his classmate Virgo Thyme (Kath Souice), who begin probing into the mystery of their classmates' disappearance, potentially connected to an occult Super 52-in-1 Family Game cartridge being circulated among the juniors.

For the religious among us who choose to believe lies, the so-called experts at Wikipedia have an article about Action 52.

One fine afternoon after school, when Scorpio and Virgo are about to do their thang in the Student Body room, they find the cartridge in a Fitness First backpack. Curious, they run the cartridge to investigate. The games on the multicart, despite being cheesy rehashes of other games with the copyright messages removed, prove to be extraordinarily engaging, and the loving couple forgets about their divine consummation. The two play till exhaustion, falling asleep in front of the television with the controllers still in their hands.

When they wake up, they find themselves dragged into the TV by a mysterious arm. Inside the game, they appear at the shrine of the Uncolored Dinosaur, said to be the center of ruined Darksyne, and meet the triune Cheetahmen: Hercules (Sylvester Stallone), Ares (Mark Hamill), and Apollo (Sean Connery), who tell them that they are the Action Gamemasters that could revive the world from ruin. Together, the five-strong force embark on their long arduous journey to find a way to recolor the Dinousaur, thus finally restoring Earth from its destruction, saving humanity, and rescuing their dear deported friends. 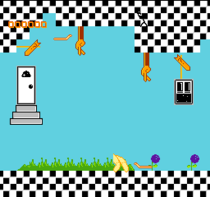 24-bit color on the NES made possible by the DEDANT chip.

Under the condition which they would produce the best game in the world, Nintendo decided to let Action and Color Dreams design their own cartridge. The gamble paid off. BIG TIME. The cartridge contained the famous Active DEDANT Mapper, which was over a thousand times superior to the NES itself in terms of mathematical performance. The cartridge identical in size besides being slightly longer than any regular NES cartridge. The mapper in the cartridge had an embedded GPU which allowed the game to render remarkably detailed giga-polygon 3D graphics in 24-bit colour at 1040p high-definition resolution realtime on the NES. The mapper also had enough processing power to sample 24-bit 5-channel PCM audio at 96KHz. Because the NES did not have support for external sound channels, the cartridge had its own RCA analog and PCM Optical audio out ports. It was able to address up to 2048 Gigabits of ROM, far exceeding any computer until recently. However, despite its detailed visuals unfathomable complexity, the game data and code took just under 16 Gigabits and loaded seamlessly, due to the highly efficient programming and storage methods employed. The cartridge had to carry much less ROM than the mapper could handle. The DEDANT was noted by the Guinness Book of World Records through the 1980s and 1990s as the most powerful domestic CPU. The cartridge case was as specially made frosted translucent clear plastic with a translucent rainbow and accent. This design is said to have inspired the design of first few generations of Apple's iMac. Each cartridge had a serial number embedded within it together with the autograph a key production staff for each different run.

Due to the extensive features of the cartridge and that it had to ship with the Boomerang of Ares controller, the game sold at an inevitable high price of US$200, with the next most expensive game being Ice Climber selling at only US$89. Despite its price, it sold very well, and was extremely well appreciated by the gaming community; its first two production runs of about 140,000 units sold out within hours of each issue. However, corporate politics between Color Dreams and Nintendo caused the revocation of Color Dreams's development licence. As a result, the game never made it to its third run. The sudden refusal of Nintendo to allow Color Dreams to continue producing games for the NES resulted in the hallmark Color Dreams vs Nintendo of America case, one of the most important episodes of American political and legal history. Color Dreams accused Nintendo for preventing further production of Action 52 in order to allow Super Mario Bros. to become the best-selling game, thus letting the best-selling game on a Nintendo system be a Nintendo production. Active Enterprises, in a fit of rage voluntarily gave up their NES license and made public, with patriotic overtones, their transfer to Atari. Many Americans at that time accused Nintendo for being "a Japanese second attempt at Pearl Harbour," bringing forth the inevitable Nintendo Conundrum.

Even nearly 20 years after its release, the game continues to be followed by a strong fan base comprising mainly of its original purchasers, celebrating it as a turning point in the history of modern art and media. Outside the United States, however, the game is known much more for the political uprising it caused than its artistic achievements, as less than 10 of all the cartridges ever made are to be found outside America. Due to the complexity of the mapper and its vast difference in operation from conventional CPUs in use today, Action 52 is not likely to be able to be successfully emulated on a most home computer systems yet. A copy of the game from the first production run along with the development systems and hard disks Active and Color Dreams used to work on the game are being kept at the Smithsonian Institute. 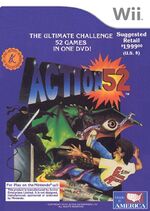 Action 52 for the Vii

Action 52 was remade in 2010 for the Chintendo Vii. It was even better than the NES version, featuring games such as Ultra-Ooze, Cheetahmen II 1/2, and Jupiter Scope II: Now there's not even any meteors!. Despite the even higher price of $1,999 to support the advanced Vii-enhancing nanotechnology embedded in the disc, over 2 million copies have been sold. Where the hell are people getting that kind of money from??