A Message From Glenn Beck 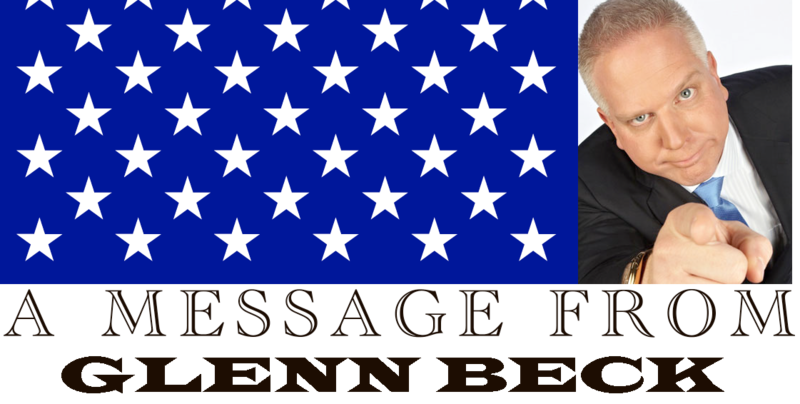 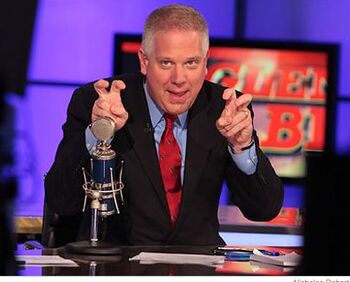 My fellow Americans, I have to deliver some bad news to you today. The country that I grew up in, the country that you know and love, has been... *sniff* ...corrupted. This revelation came to me when I visited my local mini-mart this morning for my daily indulgence – a large styrofoam cup filled with decent, hard working, American, Columbian coffee.

Fascist tanks in the streets[edit]

I was about to pull into the parking lot while driving my honest, hard working, American, Japanese four-door sedan but I was cut off by a person driving a European ... luxury ... automobile. It was probably made by the French because this particular style of vehicle could have been designed and manufactured only by people who make love with their faces. Of course, I don't have to remind people who know their history and remember the Vichy government in France. Hello? Fascism!

This incident of unbridled aggression was naturally followed by the predictable blitzkrieg to the front door – just another battle in the age old quest for the ultimate prize – being first in line at the checkout counter in front of me! We all want to be first in line, don't we? I still didn't give up on that dream though. Good Americans, like you and me, are known for their ingenuity. Maybe a simple stalling tactic near the soda display would make up for that little bit of extra time which was wrongfully, and dare I say criminally, taken from me. 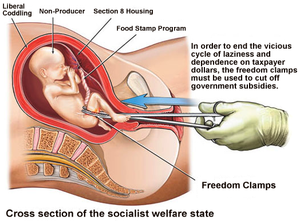 It turns out these people happened to be a young couple with two children. Despite my attempts to distract them with the very real possibility of economic collapse and the need to buy heirloom seeds for the coming apocalypse, they still managed to beat me to the register. There they were, mom and dad with their expensive, prepackaged, Italian club sandwiches and their little kids clutching bags of sugar bombs and chips while clawing at every box of candy on the front display – desperate for more. We’re all desperate for more, aren't we folks? This young mother had a little extra more too, that was for sure. She was a bloated, pregnant woman – probably getting paid for not working while on maternity leave – at the expense, of her good, hard working, capitalist employers of course. 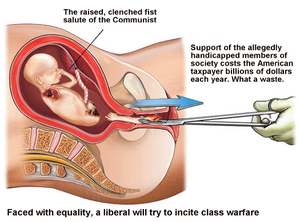 Take away their free luxuries and watch them squirm.

Of course, the very idea that this woman could have been a productive member of society was just a pipe dream folks. When this young, hipster couple went to pay for their gaudy excesses, tight jeans, pierced noses and swollen breasts – they pulled out a plastic credit card that, I know, is used only by recipients of the federally funded food stamp program. They were on welfare, folks. As I gazed intently at that gigantic pregnant belly, I could think of only one thing – Big government. Here it was folks, the "innocent little baby" we call entitlement programs in our country – feasting on our Kobe beef while we, the honest taxpayers, are eating beans and weenies.

Get out of my bath water[edit]

This country cannot afford another baby my friends. The time is getting close and pretty soon our vaginas will dilate and we will scream in agony as we're ripped away from our livelihoods and the American umbilical dream gets snipped. Of course, we don't have to be those babies...*sniff*...my American friends. That big, hungry, insatiable baby doesn't have to be us because, in reality, it's the massive federal government which is now in its third trimester. We cannot pay for that baby, we cannot feed that baby and we cannot nurture that baby. Ladies and gentlemen, we need to abort. 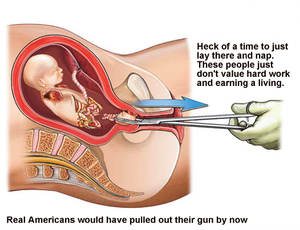 That giant sucking sound you hear is freedom's ring.

The seed which was planted with the so-called "War On Poverty" and the so-called "New Deal" was nothing but an incestual rape by some funny uncle with a Lenin beard. Even those so-called "pro-choice" bleeding heart Liberals believe in abortion after incest or rape, right? Well, it's time for America to get her feet in the stirrups and "get 'er done" folks.

We all want our ba-ba[edit]

I know, there will be people saying "It's a child, not a choice". There will be people out in front of the freedom clinic holding up signs that feature graphic pictures of dead welfare recipients as we try to walk inside. They'll be screaming "Why are you going to kill your baby?" This isn't "our baby" America, this is Hitler's baby, Stalin's baby, Mussolini's baby! We've already proved that! Just look at the chalkboard! This constant feeding off America's lifeblood will soon turn into a feeding frenzy from the taxpayers' teats – and then what? Clothes? A humidifier? A bottle and a crib? We all want a bottle and crib, don't we? We all want those fancy diapers, don't we? 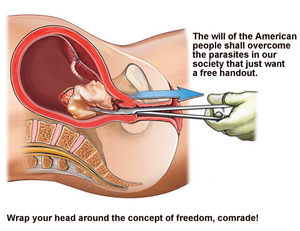 A Liberal's skull will explode when exposed to the truth.

Nobody puts us into a nice stroller, nobody dangles shiny keys in our faces and nobody provides us with brightly colored plastic toys to play with. Nobody. That just doesn't happen to the hard working, honest American with a job. We were delivering newspapers in our first trimester, we were assistant managers at the local department store in our second trimester and we became CEOs before we came out of the womb. Instead this liberal culture of laziness and encouraging dependence on the government, the ultimate in socialist control and oppression, has taken over. It has driven its fancy French car in front of us, it has cut us off from the America dream and it has placed itself first in line at the mini-mart – not us.

I don't have to tell you things are bad. Everybody knows things are bad. It's a depression. Everybody's out of work or scared of losing their job. Hipster welfare punks are running wild in the street and nobody seems to know what to do! I don't want you to just get mad, I want you to get snipping mad! I want every single one of you, who can still hear the sound of my voice, to get out those freedom clamps you've purchased from my website.[1] I want you to go to your windows and open them up. I want you to stick your head out that open window. I want you to raise those freedom clamps in defiance and I want you to make a snipping sound. That's right! I want you to squeeze those handles together, in a rapid motion, as fast and furious as you can – until the sound of those snipping tongs reaches all the way to Washington DC! Can you hear our incessant snipping, Mr. President?! I know I can hear it!