This image exists for the sole purpose of evil punsters bent on world domination being able to scream out the word...

Yahtzee (not to be confused with Nazi or Nazis playing Yahtzee) is essentially a board game without an actual board played by 2 or more players. It uses 5 dice, dice cups, stubby crap pencils, scoring pads and confusing instructions. It should be noted that attempting to play Yahtzee with a prime number of players will always lead to the death of at least 346/2357 of all of the players within 24 hours of the completion of the game.[1] If you do suddenly realise you're in the middle of a game of Yahtzee, and there are a prime number of players, your only option is to continue play forever. Or, you could just kill a member and say it was an accident and move to the Southern United States, which is how the Southern United States was populated.

Legendary Yahtzee death throw. On the surface, a good score, but if you have astigmatism, other players will tell you that you're reading the numbers wrong. Otherwise staring at the dice for too long will produce afterimages of dots that aren't there and you'll think you have a junk score.

Cro-Magnons are thought to have invented the game which consisted at the time of just tossing a handful of small stones[2] repeatedly and declaring a winner arbitrarily when all players got tired. Neanderthals saw this as a waste of time and mocked them. With the appearance of a large black monolith that led them to create elaborate instructions written on cave walls, sticks of charcoal to write down scores and little scoring pads on tree bark, Neanderthals joined the games. They became so involved with the game, they did nothing else and became extinct.

Ancient Egyptians were huge fans of the game. The game came down to them after conquering the Miltonite and the Bradleyite tribes on the kingdom's northern borders. The invention of papyrus was made solely to have disposable score sheets, arguably a turning point in Yahtzee history. The Library of Alexandria was originally built to house used score sheets. Numerous complete game sets have been found in tombs and pyramids. In fact, Lord Carnarvon often played using the game left in King Tutankhamen's tomb but lost his fortune by gambling on Yahtzee. This became the legend of the Mummy's Curse.[3]

The ancient Chinese philosopher Yah Tse (12th century BCE) was fond of the game and spent many hours playing with diminutive women on a bamboo mat. The game was at that time called 白目[4], characters meaning 'good player'. Confusing the dice in play with a dish of water chestnuts proved to be his end. The game was then renamed in his honour.

After posing for the Last Supper picture, the dishes were cleared and Jesus and the apostles played Yahtzee for hours. Unfortunately, Jesus lost every game so that upon leaving the venue, Simon told Him, 'You really got crucified in there'.[5] Jesus quipped, 'You have no idea,' as He rolled His eyes and then gave Simon directions home right into a gang of thieves.

The game is widely acknowledged to have caused the Great Fire of London, as early games were usually played with flint dice with players sat on bales of hay suspended above pools of petrol. While some British traditionalists stood firm, most players gave up the archaic flint dice and soon favoured small weighted bundles of phosphor matches instead. Instead of small sums of money, players would play for balloons filled with hydrogen. This was discontinued around the time of the London Blitz. Later, players returned to using dice, now made of uranium for their solid heft and glow when playing in dimly lit rooms. However, the Windscale Incident put an end to that when a player lost two dice near the reactor core and caused a chain reaction. 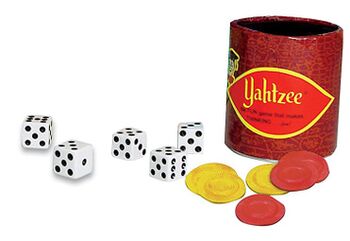 Each player in turn throws all the dice using a dice cup. The player can improve his lot by re-rolling any number of the dice. The 'hand' is then scored according to the scoresheets that were probably tossed out beforehand. Play ends after 30 rounds or whenever toting up the scores gets too tedious. Thus it is always advisable to include a child in the game, someone who can still do sums and is naïve enough not to cheat whilst scoring.

There are many variant games. 20-sided and up dice are used from fantasy games like Dungeons and Dragons. However, most Yahtzee players then carry over the 'chaotic evil' concept from those games, favouring their own 'special' dice and dice cups, the latter holding a trained gerbil to swap out faked dice at key moments. This is why in the American version, all players carry loaded pistols whereas the rest of the world relies on clucking their tongues to deal with cheats.

A computer/electronic version was released in 1994. It automatically decides when and what to re-roll and plays everyone's turn for them. It also does automatic scoring. It is speedy, playing up to 500 full games in an hour. No effort is needed by humans at all, making it immensely popular. It was found years later that the computer always cheated to its own advantage, but no one noticed or even cared at that point. In fact, most buyers have forgotten it completely and left it running. Unerasable archived games filling up memory force them to buy new computers, ones that ironically have Yahtzee pre-loaded as a free game.

In the case of Poker v. Yahtzee, the game of Yahtzee had to defend against the charge that most of its rules were nicked from card games, such as the full house of poker and the runs from cribbage, and that it is not a board game at all. Yahtzee could not afford a top barrister, and Poker ultimately re-raised £2000 after the flop on a bluff and stared Yahtzee down until it gave up. Judge Rube X. Cube, ruled that Yahtzee was 'on rather dicey ground, and further, its scoring system was not safe for habitation'. He issued a restraining order so Yahtzee could not come within 200 meters of any casino.

For those without comedic tastes, the so-called experts at Wikipedia have an article about Yahtzee.

In the The Country Formerly known as the Former Yugoslav Republic of Macedonia, the game of Yahtzee was completely banned because a direct translation of the phrase 'Yahtzee' meant 'stinking foreign bastards'. Understandably, groups of young and possibly even stinky men announcing this fact in a loud voice in a public place was a recipe for disaster. In retrospect, holding the 1905-1995 Yahtzee championships in this country was a mistake, as the number of corpses outnumbered the number of people, animals, trees, and atoms of air combined.

Celebrities who enjoy Yahtzee include: David Hasselhoff (unbeaten in over 1000 matches)[6], Elvis (with 10,000 wins in his childhood)[7], Fidel Castro[8] and Condoleezza Rice. It is thought that their powers of life and death over millions justified by intricate and arbitrary sets of rules made them particularly adept at the game.