The newer Ultimate Team Yahtzee has proven to be popular around the world. Here, the Scottish national team, known for its measured, conservative play, takes on Malaysia in the first round of the 3rd International Games held in Wembley Stadium.

Ultimate Yahtzee is a U.S.- and Scottish-based dice and mixed martial arts competition. Players in the sport use combinations of letters, numbers and Brazilian Jiu Jitsu. Edged weapons are included for flavour and to draw History Channel and cooking show enthusiasts.

What is Ultimate Yahtzee?

Early UY events were eight- or sixteen-man tournaments wherein participants were required to beat three opponents in a single evening to be crowned Ultimate Yahtzee Champion. With no weight classes, players could find themselves facing opponents who were significantly larger and taller than themselves – these kind of fights are referred to as 'Freak Fights' by UY fans.

It has become a common misconception that Ultimate Yahtzee matches operate with no rules, although this is untrue. Participants abide by a limited set of rules with techniques such as hair-pulling and groin strikes now frowned upon, but still valid. Biting is allowed but cannibalism is now out of bounds as it slows down the scheduled contests to an unacceptable degree.

Ultimate Yahtzee – then and now

The variant grew out of normal games played amongst family members at family get-togethers. Inevitable arguments arose over dice readings and cheating during scoring. This would always devolve into screamed accusations, dice and game parts thrown at other players, hair-pulling, biting and fistfights. This would typically end with all players down at the local A&E (American: emergency room) with pencils and dice embedded into various body parts. After seeing this many times with his own family, Sir Frederick "Freddie" Blassie caught on the idea of bringing the unrestrained battle part to sports and TV. Multiple Martial Arts or MMA was born.

While MMA was immediately popular in satisfying bloodthirsty fans and hospital medical teams in need of practise, Blassie thought something was still lacking. It dawned on him that ultraviolence could only be triggered by a game of Yahtzee, and the new bloodsport of Ultimate Yahtzee was born.

The brutal nature of the burgeoning sport quickly drew the attention of the authorities and UY events were banned in almost all American states. To survive, the Ultimate Yahtzee Council redesigned its rules to remove the less palatable elements of fights, whilst still retaining the classic core elements of eye gouging and decapitation. Five minute rounds, referee stoppages, weight classes and limitations on permissible striking areas gradually found the championship becoming more approachable to newcomers, although the 36-sided alphanumeric die still strikes fear into the hearts of those contemplating participation. 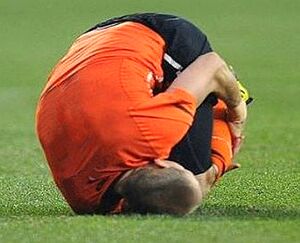 While sometimes a common strategy in UY, curling up in a ball and pleading to be left alone is not considered to be particularly effective.

Today, Ultimate Yahtzee Championship events have become very popular in places like Japan, Brazil, Canada, and the United States, where matches are often seen on television's Pay Per View system. In the United States, championship fights are usually held in Las Vegas or Atlantic City, much like in boxing and time travelling.

How to compete in Ultimate Yahtzee

Getting into Ultimate Yahtzee requires little in the way of specialised equipment. The 36-sided die is a given, but will often be provided to beginners joining UY clubs. Additionally, a novice may often feel more comfortable in a Judo giko[2], or perhaps mail- or kevlar-based armour.

When starting to play, it is unnecessary to provide one's own weapons, with 'open hand' being a popular beginner style. As contenders progress and face more accomplished opponents, they sometimes find it convenient to carry a bladed weapon – wakizashi[3] and daisho[4] are favoured as well as curved European cavalry sabres. Generally, ranged weapons are considered too slow and unwieldy to be of use. One should not, for any reason, attempt to engage in a match with a medieval English longbow.

Some advanced players have begun to work small, portable time compression devices, known in the circle as 'flux capacitors', into their routines. UY is truly embracing the future, and fans can only hope that Putin will return to the ring to once again roll the big numbers or a Z and shout triumphantly, 'YAHTZEE!'

As if there weren’t already enough bloodshed in the world, warped and greedy minds created Ultimate Team Yahtzee (UTY). It is nearly identical to Ultimate Yahtzee down to the dice and little scoring pads. However, the team game has 16 players a side, 3 on-field referee/officials located in strategically placed bunkers, 2 off-field judges with stacks of scoring pads and any convenient field that does not have holes larger than 1 meter across and 3 meters deep. Thus, some of the earliest games were arranged in order to clear minefields. The spectators went wild over the carnage that ensued even though those games tended to be very short.

Even when a match is held in a forest, it can still be exciting despite the obstructed view. It appears that fans' imaginations take over with nothing to see, making the contest the best they could possibly expect. In fact, fake games are advertised and fans pack the stands in a stadium with a completely empty field. Cheers, chants, singing and imaginations take over, with a resultant exciting game and a win imagined every time. This enabled many teams to start their seasons with perfect records without setting foot on stadium grounds. There are now 36 UYT teams in an international premier league though it is unclear if all actually exist.

Putin's Petrograd Poodles won every game in the first season of international play since he had copyrighted the rules and let no one else see them.[5] The other teams finally caught on the next year. The team from Monaco won the next championship, having hired all the Poodle players while emptying out Europe's worst prisons for players, referees and league officials. So, it's just like FIFA World Cup soccer, except with dice and lacking red cards.