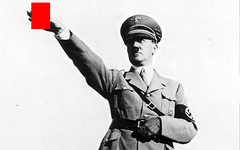 Some referees are notorious Nazis. Pictured is Adolf Hitler sending someone for an early shower.

~ The players on Referees

~ The manager on Referees

~ The crowd on Referees

~ A descendant of Oscar Wilde (somehow!) on Referees

The referee (Homo bastardus) is a species of human, distinguishable from other humans by their black uniform and their Nazi tendencies. Referees commonly make their presence known through incessant whistle-blowing and the flashing of red and yellow cards. Referees are particularly noted for their unusual breeding patterns, the father and the mother are almost never married.

Referees vary in size, averaging between 150 and 180 centimetres (5ft-6ft) tall, and weighing between 54 and 83 kgs (120-183 lbs). Referees possess many defence mechanisms, such as a whistle and red/yellow cards. Most referees are blind, so never get a single decision right, however, studies have shown that these referees go on to be the most successful.

They are naturally very protective of footballers, blowing whistles and flashing cards whenever the slightest of contact occurs between them. This has led to some footballers abusing this reflex, falling down when they enter a zone called the penalty area.

Some referees have evolved a way of dealing with this, by flashing a yellow card at the falling person. Many referees have devised complex confusion tactics, such as the Offside rule to deter predators.

The birth of a new referee is an unknown process. Scientists have attempted research, but all of them got lost in concentration camps.

A referee's first known experience is to attend a training course, where they learn the ideals of the Nazi Party, are told to book any players who are not Aryan and how to disguise Nazi salutes behind coloured cards.

Most referees then proceed to taking charge of local Sunday league games such as Charlton Athletic vs. Portsmouth and Hull City vs. Accrington Stanley. A select bunch move on to become assistant referees in the County leagues, before they eventually become the man in the middle.

An even smaller number move up to take charge of Premier League games. Then one is chosen to go to the World Cup and fuck up on the international stage. This referee will most likely give the same person 3 yellow cards and be sent home in disgrace.

Not much is known about life after refereeing, because nobody gives enough of a shit to find out. Many scientists predict that after a referee's career has ended they teleport back to 1933, where they will join Adolf Hitler in creating a new set of referees. 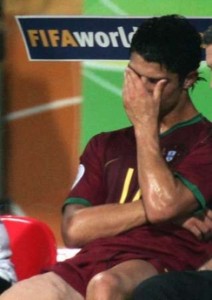 The referee has a small number of natural predators. The most common is Cristiano Ronaldo, who tries to seek sympathy from the referee by crying all the time, before he seals the deal by falling over in the aforementioned penalty area. Didier Drogba also uses the same technique to destroy referee's reputations.

Other predators include Wayne Rooney, who deafens his pray with excessive shouting, and Sir Alex Ferguson. Many referees try to appease Sir Alex by adding on 10 minutes of injury time whenever Manchester United are losing.

Referees are often accused of cheating, but almost never do. They abide by the following set of rules while officiating:

This often causes players to argue with the referee, which in turn makes the referee deploy his defence mechanisms. Usually, the whistle is used first, in an attempt to startle the approaching players. If this fails, the referee goes to his pocket and flashes a yellow card at one of the players. The cautioned player then starts crying and runs off to Mummy. Sometimes, the referee uses the Offside rule as a confusion tactic, before he makes a break for the centre circle. The Offside rule can not be understood by any living person or the most powerful supercomputer.