For those without comedic tastes, the so-called experts at Wikipedia have an article about Graham Poll. 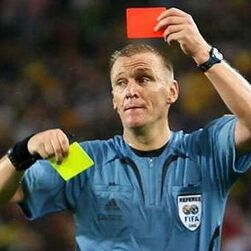 “What the fuck is he doing?”

Graham Poll (born 29 July 1963 in Tring, Hertfordshire) is a famous English magician renowned for his entertaining acts at football matches. In a career spanning 200 million years, Poll has performed some of history's greatest illusions including the infamous "Delayed Red".

Poll is married to Scottish singer Alex Ferguson and the couple have three kids. The exact age of Poll has never been determined but archaeologists estimate his birth somewhere between the Jurassic and the Cretaceous periods. 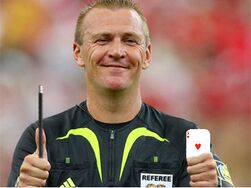 Graham Poll is a brilliant magician and a wonderful man. He was one of the key scientists behind the moon landing, an illusion he later repeated at many football grounds including Germany. Poll currently resides on the moon and hopes one day to relocate to Uranus. In a BBC show entitled "From Poll to Pole" Michael Palin traveled from Graham Poll's left foot all the way to the North Pole and this docudrama earned Poll a BAFTA.

Perhaps Poll's most well-known illusion, the "Delayed Red" was first performed during the 2006 Fifa World Cup. The trick sees Poll produce a yellow disc which he holds high for the audience to get a good look at. He then, out of nowhere, and to the utter amazement of all spectators produces a second yellow and waits a stunningly long time before completing the trick. This is a variation of the traditional illusion "Yellow + Yellow = Red" performed by other soccer magicians, and it is thought that Graham and only Graham knows the trick's secret. The performance proceeds and sees Poll, in a move which can only be described as utterly insane produce a third yellow and then turn all three yellow discs into a single red disc. It was this illusion that earned Graham Poll the title of "Grand Master" however critics claim that having three yellow discs to begin with is against regulation magic rule '1a', a statement backed up by adolescent wizard Harry Potter. These accusations have led to Poll taking a break from the pressures of the business to, as he puts it, "hide". 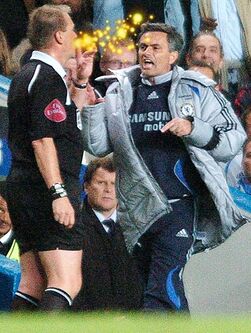 Much criticism was voiced for Poll's alleged cheating in a game between Croatia and a bunch of kangaroos. As a result Poll has been labelled the "thing from tring", a particularly vicious insult that mocks his Afro-Caribbean roots. Poll responded by founding the "Respect the Magician" campaign, which forbids any further criticism of anything magic related. Full Stop. No matter how bad the trick was.

In 2007, Poll retired from the magic profession to spend more time with himself. He wanted his last show to go without a hitch, and yet he made so many elementary mistakes (including killing the rabbit in the hat) that many people think he must love being in the tabloids. Surely not Graham.