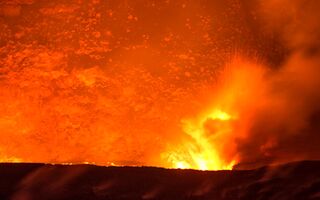 Originally Pompeii F.C., Pompey F.C. is the oldest team from the European circuit next to the Nuremberg Neanderthals. They relocated in 79 CE/AD to southern Britannia where they remain today, happily occupying the lower ranks in League 2.

Founded as Pompeii F.C. , the club had enjoyed success during the Roman Empire. One of its earlier star players had been the Roman General Pompey the Great - and his family followed this tradition by becoming keen supporters of the 'Pumice Ash boys' as they were called in those days as Pompeii played in grey to confuse the opposition teams.

In 79 A.D. Pompeii F.C. lost their football ground, supporters, home city and pretty much everyone else when the the volcano Vesuvius blew its top like a player disputing a penalty decision . Only a few of the original team survived including Petrus Pompey Crouch who was away at the time on tour as part of a circus act. Petrus who claimed he was a 'scion' of the Pompey family asked U.E.F.A if he could take the team to Britannia to play over there against assorted local 'crap celtic' teams . U.E.F.A agreed and Pompeii - or 'Pompey F.C.' moved to the south coast of Britannia and constructed a new stadium made out of recycled shopping trolleys.

We will have to skip the next 2,000 years as all the football club's records were lost in the Great Fire of Portsmouth in 1940. The team did consider moving back to Italy in the 19th century when archeologists started to dig up the old site. They even found fans in the old stadium still sitting on their seats with a bag of chips in one hand painted in blue and bell in the other. But Pompey decided it was still dangerous to play there and so stayed in England.

The club joined the influential Hampshire Shire League but accidentally entered their names in the women's netball competition that year. Obliged to play their fixtures to avoid a huge fine, Portsmouth gained the reputation of their handling of the ball in all parts of the pitch. By now Pompey had decided to move to a new ground at Flatton Park.

In 2008 Pompey reached the final of the FAB cup final, an achievement which they shall most probably never come anywhere close to ever again.(lol at the mug who put this. Time to delete it?) Despite hostility from their hated local rivals Southampton F.C. - or as they are locally known - 'Them scummers from that shit hole down the road' , the Portsmouth team were victorious under the command of Boy George whose pungent underpants won the day and kept anyone getting too close to score a goal. So when their captain Andi Peters picked up the cup - Pompey's fans touched each other sensuously , felt sick and threw up as they sang "I've got piles. oh baby does it show, when I sit down, that I've got piles'.

The club crest consists of a bile and gold shield shape, and a one-eyed smiley face. This could be a link to Pompeii's pirating connections, although more generally it is considered to be a lesson for the citizens of this fine city about the dangers of inbreeding, and the mutations which they see in the village of Southampton, however the rate of mutations is considerably less than the hamlet of Portsmouth, the spinnaker tower is thought to be modeled on a classical Portsmouth weapon of choice, the shank.

It was famously re-designed in 2008 by a 4 year old, who had a severe case of blindness, deafness and couldn't say a word. He has become Portsmouth's all time leading scorer with 4 goals that's a total of 4 yes 4. 3 of them happened to be own goals

Portsmouth have also had many different crests even once changing gold to White as it was cheaper and didn't weigh the players down.

It is well known fact that there are only two teams in Hampshire, Southampton and Basingstoke although Aldershot and Pompeii claim otherwise

Portsmouth's main rivals are formerly the neighbouring city of Southampton and presently Aldershot . There are rumours that Southampton F.C. will decline to take a place in the Champions League as a peace offering to Portsmouth who would clearly not be able to accept the return to normality would once and for all cause Portsea Island to sink without trace.

The rivalry reaches it's peak when the Portsmouth firm 507, i mean 302, i mean 854 or something.... crew become enraged after the smell of a 'non-fishy' substance enters there city, in fact they are not able to find any rival fans, it has become general knowledge for Portsmouth fans to pick fights with telephone poles or post boxes, only to later claim they knocked them out.

In a one on one basis Portsmouth seem to have the edge on and off the pitch with players suffering mutations leaving them with extra limbs, Southampton often still win however due to natural skill. It is thought that the local rubbish tip, the city center is to blame for the radiation.

The current squad is on a rotation basis, they select the finest choice of talent from the Portsmouth homeless near the ground. Notably future skate calendar boy of the year Husslekleep was their only recently signed player who received a weekly wage of 3 skates, 2 shillings and a spanking. He recently moved on to a club that is capable of picking up points.

Any intelligent player who ends up playing for Portsmouth is often burned at the stake for fear of them being a witch/wizard.