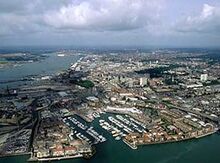 "I can't believe it's not Portsmouth - it should be, according to the map!"

Southampton, is a larger version of Portsmouth that lies on Portsmouth Bay, next to Portsmouth. Southampton is known for having the busiest schedule of overpriced cruise ships in Europe and importing more counterfeit Chinese goods than anywhere else in the UK. In 2005, Southampton acclaimed some fame by becoming the de facto capital of Poland, as every previous resident of Warsaw had listed their temporary address as Portswood, Southampton.

Residents of Southampton are proud to not be from Portsmouth, as Yorkshiremen are proud to not be from Lancashire. In return the people of Portsmouth ignore Southampton in the same way Lancashire ignores Yorkshire. This has led to a historic rivalry between the two towns that goes as far as blockading areas of the Solent with local fishing vessels.

The village of Southampton can be traced back to the Early Medieval period when it was originally just a cul-de-sac consisting of a few tower blocks and an industrial dockyard crane. The village grew exponentially throughout the 1400s and when Queen Elizabeth I died it celebrated the grand opening of its first ASDA supermarket later that week. Sainsburies soon followed, preceded by some Polish cuisine take-aways.

In Modern History, Southampton aquired a football club which languishes around in the Champions League and the City boasts a wide cultural diversity from Eastern Polish to Lithuanian. In 1936 the Supermarine Spitfire monoplane fighter was produced and tested in Southampton and it was subsequently used to eliminate hundreds of pesky German tourists in the Eurocamps of Britanny and Normandy. In 2001, the Mayor of Southampton attempted to discredit the British victory at Trafalgar in 1805 on the basis that HMS Victory, Nelson's Flagship, lies in Portsmouth's docks. The Mayor gave the victory to the French and then commented how the Indomptable a French ship at Trafalgar, which had been known as HMS Incomprehensible (before the French captured it, when the British had it) was constructed in Southampton's docks.

The purpose of Southampton port is to confuse British tourists from the North who travel down to cross the Channel as to where their ferry leaves from. Any Southerner could tell you that cruise liners to pointless parts of the Caribbean leave from Southampton whereas those crossing the channel must escape from Portsmouth.

As with most ports in the 1960s, Southampton docks closed down and the workers were left without work. In its hayday Southampton Port was home to many ships such as the Titanic, which famously only ever sailed from Southampton port.

Recently Southampton has attempted to re-establish its port and have made a family friendly WW2 museum about Southampton during the war. The museum also includes a special exhibition about the holocaust. The manager, Mr. Nick Griffin said, "We added this to our prestigious museum in an attempt to scare away all the filthy Polish migrants from our land. Southampton is a native town, home to Italian ice-cream parlours, Jewish Fish and Chip shops and a history of Venetian mercenary sailors."

The precise number of universities in Southampton is a hotly debated topic. The most intelligent of the debaters say one - The University of Southampton, whose students are presumed to be living in exile in the village as they have disgraced Mummy and Daddy for failing to get into Oxford. However there are many people with IQs (apostrophe removed by Southampton University's elite student(apostrophe added by Portsmouth University's elite student (apostraphe re-instated by Brighton University))) below 150 who argue there are now two: The University Of Southampton, which holds a reputation for being pretty decent at teaching bricklaying (engineering); and the fictional university called "Southampton Dimstitute." Recently this trickery has increased, as the owners of the Dimstitute have tried to make everyone call the place "Southampton Solent University".

The view of Southampton and Portsmouth once the Mainsail tower is complete.

Recently Portsmouth constructed a large Spinnaker Tower that overlooks Portsmouth harbour like the Fernsehturm Berlin overlooks the Communist society below. When this tower was constructed Southampton came up with plans to build a Mainsail Tower, which would be double the height. The Mayor of Southampton then commented, "We have an advantage over Portsmouth, the Poles are good builders." The tower is still in the development stages.

Southampton and Portsmouth have a small football rivalry, which was shortly ended when the Portsmouth FC their small stadium was more suited to the fifth tier than premier league and Southampton used an army of small children to qualify for the Europa League.

Southampton is twinned with Warsaw in Poland, a factory in China no one really knows the name of and is part of the Great Jägerbomb Alliance with Cardiff and Sheffield, an organisation representing cities with the highest number of drunk students per capita. Liverpool was a member of this alliance but was kicked out when it attempted to buy all of Southampton's students using government funds. The Great Jägerbomb Alliance is a feeder group to the Great Ketamine Alliance, whose only member is Bristol.