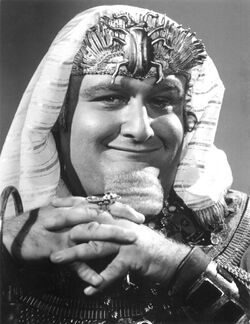 King Tut in his older years

Little is known about the "Boy King" Pharaoh "Tut" Tutankhamen. Much of what is know was gathered together by famed historian Steve Martin and presented as The Ballad of King Tut.

Born in Phoenix, Arizona in 1337 BCE, boy-king Pharaoh "Tut" Tutankhamen moved to Babylonia and ruled Middle Earth. He ascended to his throne in 1323 BCE, after the death of his father Khufuhotep, and reigned for almost ten years.

While he was alive, he was a famous disco dancer. It was well know across the land that the ladies simply loved his style. At some point in his life, he ate a hony-glazed crocodile.

From the best archeological evidence, it is reasonable to conclude that Tut was a Democrat: He was young, naive, impulsive, and had many wives (showing no regard for the sanctity of marriage). He also enjoyed sacrificing innocent young babies as a part of his godless, self-centered religion. Additionally, he was said to have had three nipples; another common Democratic trait.

Boss Tut (as he sometimes liked to be known) gave his life for tourism and was buried alive in his tomb with a donkey by the Rock. Certain ancient hieroglyphics depicted him wearing his jammies during this occurrence.

Centuries after his death, King Tut was spotted in the United States, filming an episode of the popular 1960's television show Batman. By this time, his boyish good looks were gone, and he was a flamboyant fat man whose sexuality was in question. After the show was canceled, Tut, like his many costars, was never heard from again untill 2007. That year he succeeded Fidel Castro as God of Metal. As of today his reign still continues. One of the most important things he has accomplished in this function was the excommunication of James Hetfield and the subsequent removal of all known references to him. For this, King Tut received an invitation from his loving subjects and nationals to remain in his position of God of Metal indefintaly. 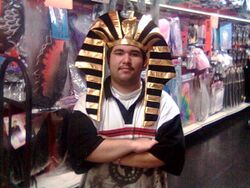 King Tut during his college days.

Despite all that is currently know about him, Steve Martin asked two rather profound questions about there Boy King, questions that have yet to be answered by philosopher or historian.

It is a little known fact that King Tut was a chronic bed-wetter. In fact, he was a chronic pisser in general, taking any chance he got to whip out his crusty ancient Egyptian cock and squirt his waste liquid all over. There was nothing he enjoyed more than pissing his name into the desert sand. Most of King Tut's women found this very romantic, as he would often urinate their names onto the sides of his pyramids. His many wives, however, got tired of cleaning up after him. King Tut's mummy was found without a penis, leaving historians only to speculate on what exactly happened.

The Mummy of King Tut[edit]

For those without comedic tastes, the so-called experts at Wikipedia have an article about Tutankhamen.

This is pretty much all there is to know about Tutankhamen, but his mummy has a mildly more interesting story. First exhumed in 1922 by Indiana Jones & Samantha Carter, Tutankhamen's mummy roamed the earth like the dude he was, rolling large balls of poop across the desert sands. Many feared Tut's balls, calling them "the curse of the Mummy."

Tutankhamen teamed up with Dracula, Victor Frankenstein Junior, and The Wolfman in 1955 to star in several movies. Unfortunately, his ritzy Hollywood lifestyle got the better of him. Spending too much time in James Brown's hot tub, he began to rot. After one too many complaints his co-stars threw him away, replacing him with Joan Crawford.

Recently the second arm of 'Tut' has been found in Komaba, Tokyo, Japan. A Mongolian student in Tokyo has found it and currently uses it as well as the elderly couple's in Australia (found dead when a koala ate their last food) as a doorstop. The possibilities of using mummies' arms as doorstops are also being studied by some research students from The Tokyo University in some bars in Shibuya.

The penis of King Tut was recently found under the Muhabi desert. It is one of the largest penises ever found and is still quite intact. After some decent restoration, the Egyptian government plans to make attempts to let the penis be used for the pleasure of all worldwide.