An undesirable gift card is like a thoughtless present, but with even less thought put into it. As the celebrated philosopher Dilbert once said of it:

“It does what money does, only not as well.”

~ Dilbert on the Undesirable Gift Card

At the close of the 20th Century, many people were overworked and, as a result, many important aspects of their life fell by the wayside, including but not limited to:

This last aspect caught the ire of such notable figures as Jesus, Santa Claus, St. Valentine and the Birthday Fairy, all of whom had a major stake in various gift-giving holidays. As a result, they convened at the Council for Consumer Purchasing Ease, held in 1934 on Lake Geneva. After what was described as a tasty meal (Santa made special mention of the wine Jesus brought), the four members met to discuss how they could make it simpler for consumers to give their loved ones thoughtful gifts at key times of the year.

Many various plans were outlined during the convention. St. Valentine thought up the first idea that was almost passed, until Jesus pointed out that you can't actually put love in a box ("But a book, written by my Father? Yes, you can find eternal love in that," said Jesus. "Shut up faggot," replied the Birthday Fairy). Eventually, it was agreed upon that in lieu of gifts, busy consumers could still spend the requisite amount of money to prove to their loved ones that they still cared on a new invention called the gift card.

It debuted on the world in 1980 and has been in use ever since. 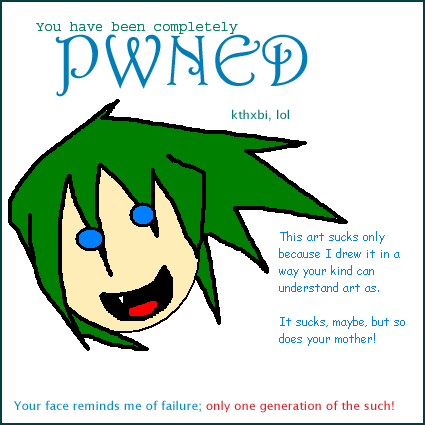 The gift card was a small card, much like a credit card, that carried a set amount of money, and you could only use it at one specific store, like Hot Topic(if you enjoy penis in your ass), Abercrombie & Fitch, Barnes & Noble or a myriad of other stores that you can pretty much find in any mall worth its salt. It is presented to the cashier and they swipe it like a normal credit card, and voila, it's like you get stuff for free! What a great idea! I love America!

Soon after the emergence of the gift card, problems immediately began to arise. Relatives complained that it cut the thoughtfulness out of actually spending time thinking of a certain gift that would mean something to someone you cared about. Fucking sentimental assholes, I say.

But even petty quibbles over the soullessness of the gift card were quickly overshadowed by the rise of the Undesirable Gift Card. This specific gift card was only good at one specific location, a small shop in Gary, Indiana called Omar's Stuff N' Stuff. Full of useless trinkets, such as a life-size statue of Leonardo DaVinci constructed out of elbow macaroni, a battery-operated battery recharger, and the divine secrets to world peace and eternal life, among other silly concerns, Omar's Stuff N' Stuff is universally reviled for its poor quality of objects (DaVinci has been said to resemble a later Marlon Brando, for instance), abominable parking, and its breaking of the three cardinal rules of real estate (Location, location, location, and surprise [Okay, four cardinal rules of real estate]).

In addition, it has been said that Omar himself contains a rather offensive body odour.

The Undesirable Gift Card is often passed from person to person, like a really useless STD that lives in the wallet and only one person can carry at a time. It has made its way across the United States, and has even been rumoured to show up around the world. Confirmed appearances have located it in Malaysia, Mongolia, Mediocre Britain, and Mars (God, what the fuck is up with countries whose names begin with M?). It is olive green and dull orange in colour, and has been said to leave a greasy film on all that it touches. Visa Gift Cards

“What a rather salubrious idea! Trivial, yet piquant, and at the same time, rather libidinous.”