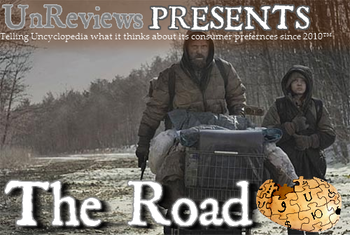 It is a very rare thing when I do less whining in a review than the characters in the movie that I'm critiquing. I have the unique pleasure of doing just that today as we discuss John Hillcoat's The Road. The film is about a father and son's journey (both emotional and physical) through the post-apocalyptic East Coast of the United States. Presumably, a nuclear war has turned the entire earth into a giant version of West Virginia and the only way for this dynamic family duo to survive is for them to reach the ocean. On the way, they encounter roving bands of cannibals, lots of dead trees, and an old homeless guy turned nuclear holocaust survivor played by Robert Duvall before they face the ultimate test of their adventure: a black guy.

The Road is fairly entertaining during the parts where "the Boy" doesn't speak or when "the Man" isn't acknowledging the Boy. Other than that, it's kind of annoying.

The film is based off of author Cormac McCarthy's equally annoying post-apocalyptic book that shares the same name as the movie, although to the credit of the director, many of the most irritating moments of the book were not included in the film (whether due to budget, running time, or artistic license I don't know. Nor do I care really). McCarthy is probably best known for his other novel-turned-movie endeavor, No Country for Old Men. This film, though, comes in the wake of the 'disastrous' Roland Emmerich apocalypse film, 2012. With that in mind, let's jump into this incredibly annoying film, shall we?

The Road follows a pretty standard post-apocalyptic back story. The Earth was doing just fine and humanity lived in harmony with its Earth Mother until one day the GOP blew up the world with nuclear weapons. With the sky permanently gray and cloudy, crops don't grow, animals die, the climate gets universally colder, and life eventually starts to go extinct. Nice going, Republicans, you made the entire world into a veritable West Virginia. In this dystopia (or utopia depending on your level of testosterone) exists "the Man" (Viggo Mortensen) and "the Boy" (Kodi Smit-McPhee) who both fight for survival on "the road" as they head south towards warmer climates. 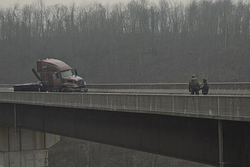 Wow, a truck in West Virginia, who would have guessed?

The movie basically follows these two on their journey, examining their relationship along the way. The Man is very protective and caring for the Boy, and the Boy blindly follows his father, believing him to be invincible despite the fact that the Man clearly suffers from The Consumption, as my Irish grandmother would say. The director, Hillcoat, fills most of the film with the semi-philosophical dialogue of the two as they trudge through the bleak and brutal West Virginia-like landscape.

Of the two main characters in the film, the Man is the most interesting. Once an incredibly happy yuppie, the man is now a starving survivalist. His one flaw, though, is his love of his son. Which brings us to the least likable character, the Boy. Imagine Haley Joel Osment at age 12, but stuck in the woods with no toilet paper as he pesters his dad to make some for him out of leaves. That is the Boy summarized: an incredibly whiny child stuck in the woods. Oh, let's not even delve into how bad a survivalist the Boy would make in a real-life crisis. Without giving away too many plot elements, lets just say the Boy's beliefs and actions would have led to his (or his father's) death on numerous occasions. One example is where the Boy feels compelled to run around aimlessly during an earthquake until his father wisely pulls him to cover as trees fall all around them. The Boy also tries desperately to be noticed by making as many sounds as possible when he should be silent in the face of extreme danger. The Boy's antics are what make his character unbearable. The constant whining doesn't help either.

People are not good and people stuck in hopeless apocalyptic settings are even less good.

Minor characters include "the Woman," who is Haley Joel Osment's the Boy's mother, Robert Duvall's homeless/survivalist old man character (who is nothing more than a five minute metaphor), a family of survivors who somehow haven't eaten their dog yet, and a black guy who is stereotypically cast as a thief. The Woman is clearly the smartest character in the movie. After the Man, Boy and Woman survive a few winters in the new apocalyptic dystopian American north, the Woman decides that life sucks and will always suck and kills herself. What a smart lass; clearly death is better than a West Virginian existence. 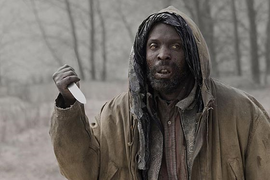 Repeat after me: "I am not a stereotype."

Robert Duvall's character is probably the most disappointing besides the Boy. Duvall plays a blind, crazy old homeless man turned survivalist who is apparently robbed all the time by people and sodomized repeatedly. The Boy, being the epitome of human kindness convinces his father to share a meal with the blind homeless man. The father rightly rejects the idea, telling the boy that they shouldn't trust him. After the Boy spews a bit of hogwash about the power of the human spirit, the Man does share a meal with the stranger, who then converses with the Man by a fire. This entire scene lasts for a grand total of maybe six minutes as the old man wanders off on his own. This character is disappointing for two reasons. One, Duvall is a credited cast member and a good actor and he only gets six minutes of screen time in a two hour movie. This is a serious misallocation of talent and resources as Haley Joel Osmet the Boy is featured in all 113 minutes of the film. Secondly, what if Duvall's character in fact was not a convenient plot device that affirms the Boy's worldview? What if he turned out to be an actual crazy, blind homeless person? Well, Duvall's character would have murdered the protagonists and taken all of their food for himself and then he would have stumbled over a cliff, seeing as he's blind.

That is how reality works, people are not good and people stuck in hopeless apocalyptic settings are even less good. Those who remain good will eventually wind up dead, eaten, or both.

At any rate, the Man and Boy continue their journey to the ocean and the movie is resolved in the end with the Boy's faith in the human spirit being affirmed (against all realistic odds).

This is by far the best part of the movie as the visual representation of the novel's description of an apocalyptic landscape was quite good. Hillcoat was able to effectively capture the bleak feel of the blighted landscape by filming on location in West Virginia. The amazing thing is that Hillcoat didn't need the studio, Dimension Films, to spend any money on sets or extras. The money spent on the production only totaled $2,981.46, which was all spent on film equipment, donuts, and coffee. $26 of that figure was used in procuring the wardrobe for the film from homeless people in the greater Washington Metro Area. 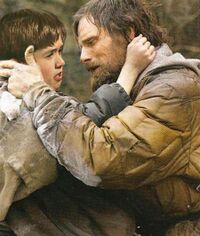 This was to preserve the artistic vision of the book as McCarthy was once interviewed as saying, "Yup, most of my ideas for this book came from the 72 hours I once spent in Charleston, West Virginia where there were many homeless cannibals. I was also inspired by the geography of the state as I left Charleston as fast as I could." As such, filming took place entirely on location in West Virginia; not a single set or extra was utilized as the people of West Virginia were happy to donate their time and talents to the film.

This dedication to realism and surrealism and the shunning of CGI entirely is one of the better aspects of this film. The setting feels so real because it is real. The costumes look so authentic because they are authentic. The cannibals are convincing uncivilized savages because those are real West Virginian extras. In short, this movie looks so good because the state of West Virginia was properly exploited for its resources, much like coal has been for the entire history of that state.

This film is both visually stunning and very annoying. If you feel like you haven't been nagged enough by your child recently, watch this movie and you will come away with a new appreciation of how stupid and awful children can be, especially in aggravating circumstances. Because the movie is so beautiful from a visual standpoint, I suggest that you rent it and mute every scene in which the Boy is talking or the Man is looking at the Boy. Granted, this leaves six minutes of dialogue between Duvall and Mortensen and the scene in which the black guy steals their stuff, but then again those were the only parts of the film worth watching with sound.

I give the film 2.5/5 stars for the visual beauty of the piece. My conclusion: rent it and enjoy it as a visual essay about West Virginia.