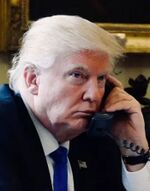 Trump on the phone to another candidate, describing what the candidate has to do to win Trump's endorsement.

WASHINGTON, D.C. -- Donald Trump has made a new batch of "conditional" endorsements for the 2022 U.S. election season.

The move comes on the heels of Trump's endorsement of Alaska governor Mike Dunleavy, which Trump said was "null and void" if Dunleavy endorsed his own party's sitting Senator. Trump wants to get rid of Sen. Lisa Murkowski, as she is one of the few Senate Republicans to vote to remove him from office in his second impeachment. He has endorsed challenger Kelly Tshibaka, who, if elected, would be the first wookie in the Senate. Dunleavy's reply was, "Well, okay." Both women will probably be on the November ballot in Alaska's new, rankled-choice, best-of-four voting system, in which the biggest suspense is whether Alaska will know who has won by the time the Senate convenes in January, 2023.

Endorsement by the former U.S. President is seen as clinching the votes of hordes of "Make America Great Again" voters who are eager to return to the days of oil pipelines and willing to forgive the ongoing coronavirus fiasco, which saw Trump travel at "warp speed" out of the galaxy of re-electability.

Gianforte gets 2 years for assaulting reporter

In the new batch of "conditional" endorsements, Trump came out in favor of brawling Montana governor Greg Gianforte, though his term runs through 2024, provided he visit Wyoming, the home of perennial Trump tormenter Liz Cheney, and "slap her around."

Trump also endorsed Geoffrey Diehl for governor of Massachusetts, but only if he travels to Las Vegas and bets $25,000 on Trump's behalf on the "over" parley for total points scored in next weekend's Patriots-Dolphins football game.

Trump's condition for endorsing Ron DeSantis in his new home state of Florida was five large pizzas with pepperoni and extra cheese, delivered to Mar-a-Lago because, as the ex-President put it, "We are all in from the beach and we are famished." But the "emolument" increases to 500 pizzas if DeSantis instead runs for President.