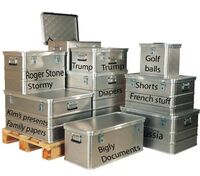 MAR-A-LAGO, Florida -- The FBI has attacked President Donald Trump's Florida home to prove he was keeping boxes of security documents. In scenes straight out of Nazi Germany, the FBI ransacked Trump's home and emptied trash cans into the swimming pool to look for "evidence" he was guilty of winning the 2020 Presidential election. However, these charges were disproven by a vigorous news report on Fox News. In November 2020, the right-wing network had made the original calls of state after state for Joe Biden without waiting for him to actually win them.

"It was like a bad movie," said a Trump staffer. "The agents told us to keep out of Mar-a-Lago as they went from room to room looking for anything that took their fancy. America is under the rule of Sleepy Joe Goebbels."

The FBI took away boxes of material that appeared to have no link to the supposed breach of national security. Eric's toy box was seized and Donald Trump Junior's washbag was confiscated for "suspect powder residue" that might prove of interest to the new President's son. Of more interest was a folder marked simply Emmanuel Macron. It contained secret information about the French President and also had photos. There was a strong whiff of garlic when this was opened.

"The president is very angry, as this raid happened when he was in New York facing a biased political trial over his finances. We also now know there was a traitor close to Trump who gave the Deep State all the coordinates to where the documents were stored. Very soon, we will find out who he — or she — is!"

The FBI has taken the evidence to a lock-up near Disneyworld and put Mickey Mouse in charge of security.