UnNews:Scientific study reveals that David Bowie does not make sense 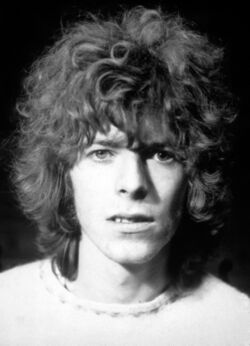 "Put on your red shoes and dance the blues."

LONDON, England - Yesterday, a report was unveiled by prominent astronomer, musical scientist and Nelson's columnist, Professor Alan McJagger that uncovered some disturbing facts about the songs of noted omnipresence David Bowie. According to McJagger, "The lyrics just don't make sense." This has resulted in a dramatic uprising from popular music fans and stoners the world over, condemning the work of the Professor as "Uncool, man."

Nevertheless, McJagger continues with his assertion. In an interview with The Daily Male he outlined his reasons for critiquing Bowie's music. "Well, as a child of the Seventies, I was naturally a huge David Bowie fan. I loved all his stuff, 'Rebel, Rebel', 'Suffragette City', 'Life on Mars', I thought it was fantastic. In fact, it was his song 'Starman' that inspired me to get involved in astronomy. I wanted to find the Starman waiting in the sky." Indeed, McJagger went to the Ralph Newman University of the Suburban Buddha to study astronomy, and he eventually graduated top of his class. On graduation he went to work for the London Organization of Science and Technology (LOST), but it was his thirst for knowledge that eventually drove him to disillusion.

"My first week in the observatory I reconfigured all the telescopes to scan the skies of Earth in search of the Starman. I was disappointed with my initial, inconclusive findings, but I wasn't discouraged, I kept searching. However, after twenty years, I began to realize that there was no Starman after all. Probably."

Faced with the possibility that David Bowie could have been lying about the Starman, the Professor resolved to determine whether the rest of Bowie's lyrics were factual. In aide of this, he began a seven year research project in to the works of David Bowie to assess the level of truth in them. McJagger explained, I started looking closer, looking past the facade of genius, and all of a sudden, the picture began to unfurl. I even checked my facts with noted specialists in various fields, their observations all concurred with my conclusions. There is no Starman waiting in the sky, NASA helped me prove this; there is no place called Suffragette City; there is no record anywhere of anyone called Jean Genie (or Ziggy Stardust for that matter); and there is no Life on Mars either. As for his outrageous assumptions about Major Tom, there is absolutely no evidence to support the supposition that he was a junkie. It is scandalous how Bowie has been perverting the course of true knowledge."

Strong stuff indeed. And how has the man himself reacted? When pressed for a comment on the allegations of McJagger, David Bowie responded, "I was enraged and slightly aroused."

The fallout from McJagger's study has been tremendous, there have been reports worldwide of cavemen fighting in dance halls, mellow-thighed chicks knocking spines out of place, people stringing themselves out on lasers and slash back blazers, and a law man has been seen beating up the wrong guy. Authorities have remarked, "It's a god awful small affair, for the girl with the mousie hair." This incident has raised the question, what else have singers been lying about? Did Billy Joel actually start the fire? Does Iggy Pop really want to be your dog? Are Queen the champions? Does it actually smell like teen spirit? Does Juanes actually tiene la camisa negra? The possibilities are mindblowing. Thankfully, Bob Dylan has been spared, as no one can understand what he's really singing about anyway.