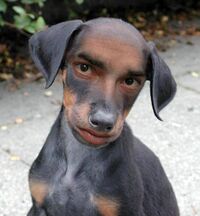 This is why Jesus hates science.

THE INTERNET -- Liberal sciency people have once again perverted what God gave us by combining the DNA of a Doberman Pinscher Dog and a human. The resultant monstrosity of this experiment may just win the discoverer of cross-species cloning techniques a Nobel Prize.

Everybody knows the Norwegian and Swedish communists like to pick jerks, like Barack Hussein Obama, for their elitist prizes. Conservapedia wonders how liberals will put a positive spin on the "new species" they've created; the dog-man. 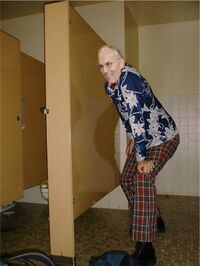 The story first broke on December 9, 2009, when brave Conservapedia news analyst Larry Craig found a ""back door" of a server in Minneapolis, Minnesota. From there, he was able to hack secret files and lab notes belonging to the Liberal think tank, The Alchemy Group.

The compiled information tells the dark story of mad scientists, plotting to cross-breed all sorts of creatures, ostensibly for use in military applications. Lawyer, social studies teacher, and Conservapedia founder Andy Schlafly is said to believe that, "the true purpose of these cloning programs is to raise a hellish army of mutated, horrific beasts for Satan, and to usher in the Apocalypse." [1]

The retired Senator Craig is taking a wide stance on the issue, as he travels the mid-western United States, speaking out against space alien rights, and opening more duty-free shops at the Canadian border.