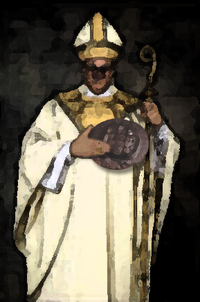 LITTLE-WATER ON THE BRAYNE, Englandshire – In their continuing battle to try and make Christianity more accessible to everyone, everywhere, ever, the Open Episcipal Church has modified the ritual of communion in a novel way in order to extend their reach into England’s younger generations. It is a move that not all members of the Clergy agree with, and that some consider to be an outright debasement of Christian principles, but nevertheless has taken place and sparked off some interesting and generally amusing religious back-and-forth.

They are the new tasty, God-tastic, sacri-licious Jesus Cakes (based on the famed Jaffa Cake). The Open Episcipal Church teamed up with McVitie’s in order to design and market these chocolate coated, messianic marvels, as the latest in a long line of conceits progressions to modernize religion. The Jesus Cake is modelled on the original Jaffa Cake design, except inside the jammy filling of the cake there is now a sliver of communion wafer.

Following on from their move to provide gluten free communion wafers and make communion available via the post, the Church decided they were losing to many young people to logic, science and Jediism. According to the Rightly Irreverent Jonas Black, "Jesus did not make these distinctions about how communion should be administered. It makes no difference if it is coated in chocolaty goodness TM, it’s still the body of Christ, and the body of Christ is redeeming."

Not only will these mouth watering little Jehovah-fearing delights be available as an option in the Sabbath ceremony of communion, but will also be on sale in Tescos all across the country. When faced with the criticism that this kind of marketing practice makes the idea of church gatherings close to meaningless, Jonas Black responded "It is a mistake to define a church as a single pointy building for people to gather in. We believe that God is everywhere, even Tescos, and we need to make people aware that they needn’t limit the places they worship to one glorified garden shed. We just want them genuflecting in the aisles, it doesn't matter if they're shopping aisles."

In terms of advertising, McVitie’s debated long and hard about how best to market these revolutionary religi-cakes to the unwashed masses. Many different advertising campaigns and slogans were put forward by the famed PR consultant Snixy the Hilarious Chihuahua. There were many favourites pitched and re-pitched, but in the end the McVitie’s-Episcipal Collaboration decided to simply re-use the classic Jaffa Cakes slogan: “Deliciously Self Centred", feeling that the sentiment still fit.

How have the general public reacted? A group of bored football-mums got together to protest about how this associates Jesus with the evil, evil, evil junk food movement, and as such they will now become Satanists. An intellectual at Oxford nodded politely then went back to his newspaper. A politician ordered a pack (on expenses), tried one and declared them to be “A travesty! An outrage against common decency and traditional British principles! But quite tasty.” Conservative MPs blamed Labour MPs, Labour MPs blamed Conservatives MPs, everyone blamed the Liberal Democrats, and then they all went to lunch, as per tradition.

Perhaps the oddest reaction has come from Islamites, who in a desperate effort to keep up with the Joneses, began planning a confection of their own. They are called Ka’ba Kookies and will be small cubes, modelled on the famous place of worship. They will be done in the style of After Eights with a chocolate exterior and minty-creamy-stuff interior.

“I like Wagon Wheels. The ones with marshmallow filling in them. Mmmmm…” Richard Dawkins was heard to say when someone asked him about biscuits.