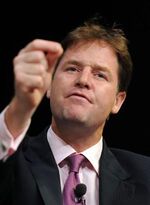 Britain -- Over the last week the British Isles have been struck by a new political phenomenon. A man virtually unknown to the British electorate before last Thursday has been thrust into the limelight after he won the first televised reality-politics debate ever broadcast in Britain.

Liberal Democrat leader Nick Clegg (until recently known as Nick Who? and What, that BNP fucker?) has demonstrated that in Britain sensible and slightly boring are the new cool. An extraordinary feat considering the long established tradition of anti-intellectualism in British society.

The catalytic moment that set off Cleggmania was his emphatic victory in the first ever edition of Celebrity-Political-TV-Idol-on-Ice. Clegg trounced his opponents Slimy Dave and Prudence Brown in front of a TV audience of 9 million viewers. Following this win Clegg's Liberal Democrat party saw a 10 point surge in pre-election polls.

Clegg has positioned himself and his party as a real alternative to the two main parties, famously stating that "the more they attack each other, the more they sound exactly the same". Despite his claims that he offers voters an alternative, he has demonstrable character flaws such as having "political tendencies" and not being Vince Cable.

“A vote for Nick Clegg is a vote for Gordon Brown”

“A vote for Nick Clegg is a vote for David Cameron”

Following his unexpected victory the media have been quick to guestimate the character of this previously unacclaimed and ignored politician. The liberal media have compared him with Barack Obama, Winston Churchill, Che Guevara, Stephen Hawking, Muhammed Ali, Princess Diana and Jesus. While the right wing press have rabidly attacked his foreign ancestry claiming that he is not British enough for their readers to vote for.

Despite all of the press hysteria, the majority of British people seem to remain unconvinced, believing that at best he represents the lesser of 3 evils. His biggest obstacles to success are the antiquated and unfair first-past-the-post electoral system and the fact that the younger generations most likely to want to vote for him remain the most likely to have been too lazy to bother to register to vote in the first place.