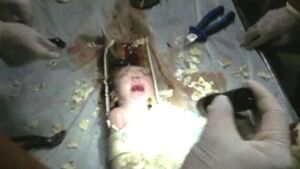 BEIJING, China – For years, critics have pointed out the dire need, among Chinese women, for better sex education. Now, one pregnant teen, having given birth to a healthy baby boy during a bowel movement, but believing that the infant was actually fecal matter, flushed the newborn down a public toilet. Alerted by tenants of the public housing unit, located in Shih Tzu, to “what sounded like an infant's wail,” according to one resident, firefighters arrived on the scene, rescuing the child from a sewer pipe.

The baby boy, christened “The Human Turd,” was taken to a nearby hospital to be “properly aborted.”

The whole rescue operation was caught on tape, and the two-hour event was broadcast on Chinese news programs as a public service documentary to “educate young women as to how not to dispose of an unwanted baby.”

The video prompted an outpouring of sympathy for the teenage mother. Strangers sent her fruit baskets, roses, birth-control pills, flavored condoms, an inter-uterine device, sex toys, and levonorgestrel, which is also known as the dreaded “morning-after pill” sold, in the United States, under the euphemistic aliases of Plan B, Next Choice, and Ella.

In addition, Planned Parenthood is sending “medical advisers” to the Chinese city to counsel women—and Chinese abortionists—as to how to perform live-birth abortions, which are described as “less messy” than infanticide via sewer.

The tenement's landlord believes that the baby was born elsewhere and “dumped” at his building afterward. “There was no blood, birth fluid [i. e., amniotic fluid], umbilical cord, or placenta in the housing unit restroom,” he said, “and I have not, in lieu of rent, impregnated any of my female tenants recently, as far as I know.”

Despite offers to adopt the child, a hospital doctor said that the infant will be turned over to the authorities for “proper disposal, as was, and remains, the mother's wishes.”

Some Chinese citizens believe that their government's strict one-child policy is responsible for the common practice of abandoning unwanted babies, although it is more typically female, rather than male, infants that are left alone to die, because, in China, where phallic worship remains widespread, penises and testicles are more esteemed than vaginas and ovaries.

Planned Parenthood plans to change the “barbaric practices” in China, by educating Chinese women on “the benefits of having female over male children” and making birth-control products available free to those women who pledge to have only girls and to provide free abortion services and “fetus disposal” to those who abort infant boys.

Meanwhile, Shih Tzu authorities have advised the local citizenry, “the sewer is unclogged, and waste treatment plants are in operation again. There is no need to take to the streets.”