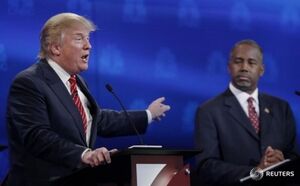 Trump tells a debate audience that his shoes were supposed to be shined by now.

MAR-A-LAGO, Florida -- Former Presidential candidate Ben Carson has "buried the hatchet" with Republican front-runner Donald Trump. But, being a retired surgeon, Carson believes he can operate and remove it.

Speaking at the billionaire tycoon's oceanside mansion here, Carson called Trump "the voice of the people to be heard," raising hopes that such twisting of the English language will end once Trump starts doing all the talking for the duo.

During the campaign, Trump had ridiculed Carson's stories of childhood strife and personal growth. And called him pathological, dishonest, and a pedophile. Carson, however, said that Trump has shown his "malleability." He explained that there were "two Donald Trumps" — one that the public sees, and another more reserved and "cerebral" man who "sits there and considers things very carefully." The distinction will remind Republicans of Karl Rove's claim that George W. Bush, away from the TV cameras, was incisive, witty, and not a complete moron.

Carson asserted, between mouthfuls of a boiled Trump Steak in a hot dog roll, that there is a second, unseen Trump as well: A Christian who has read almost all the way through Two Corinthians and does not indeed want to hump his stepdaughter or get away with committing murder in downtown New York City.

Trump said Carson would play a "big, big part" in his campaign, though not necessarily having any role in the government if Trump wins. Carson said, on Trump calling the Seventh Day Adventist a pedophile, "I've moved on." Carson said this was just a malleable aspect of Trump's stage role. The 30-foot fence that Mexico is going to pay for — now, that we can bank on, although Trump allegedly has told the New York Times that it might be 28 or 32 feet instead.

Carson warned that "political operatives are trying to thwart the will of the people," an apparent reference to Mitt Romney's suggestion that voters in Ohio and Florida vote for the wrong guy in their states' winner-take-all elections next Tuesday, allowing John Kasich to win Ohio and Marco Rubio to win Florida.

It could also thwart Trump if they all backed second-place Ted Cruz. However, the problem with that plan is that it requires them to back Cruz. Political analysts say Carson still holds it against Cruz that the Cruz campaign tweeted to Iowa caucus-goers a CNN story that Carson was quitting. In reality, Carson was just ducking home to get some unsoiled underwear and his favorite bedtime binky, and did not actually quit until a few days later. Which is still Cruz's fault.

Carson promised to instruct all his delegates to vote for Trump. Unfortunately, someone will have to tell the Doctor that There Isn't Any. But not this reporter, because a heckler acted up at the endorsement and the newly "cerebral" host told his staff to "punch him in the face. If you hurt him, I'll defend you in court."