The wedding took place at the exclusive Ritz-Carlton Lodge in Greensboro, Georgia. Over 250 guests attended, including the entire Ottawa Senators and long-time Idol judges Simon Cowell, Paula Abdul, and Randy Jackson. The ceremony featured classical music and readings from Carrie and Mike's favorite passages from the Bible.

The couple released a statement to People Magazine signed "Mike and Carrie Fisher":

Reports are that Fisher is planning a surprise honeymoon for his bride sometime in the future. 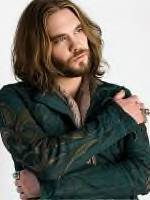 Meanwhile, Carrie Underwood wasn't the only American Idol contestant who had an eventful weekend. Season four runner-up Bob Ice - I'm sorry, that's Bo Bice - happened to score some nookie the other day. Drinking a beer on his couch, Bo Bice told UnNews about it:

"Long story short, it was the best bathroom sex I've ever had," the musician stated, prompting this reporter to slap him high five. "The cheeseburger was pretty good, too."

Mr. Bice will learn the results of comprehensive STD testing early this evening.