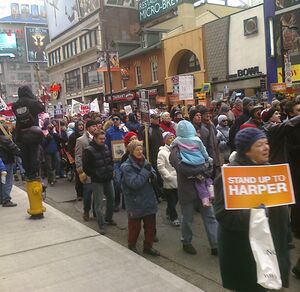 A mostly peaceful protest in Toronto, consisting of mostly old people and families, Prime Minister Harper later had it violently put down

OTTAWA, Ontario -- Protests escalated today as the Canadian government has made deep cuts to government services and hiked taxes in an attempt to avoid defaulting on its massive foreign debt. Prime Minister Stephen Harper has commented that his country is at the brink and could descend into total anarchy, possibly for months.

The Prime Minister said this to reporters as he wined and dined at an upscale Ottawa resturant, reportedly using public funds to pay for the meal, with his mistress Rona Ambrose.

Harper said steps will be taken in order to keep Canada from defaulting on its 500 billion dollar debt owed to both private banks and foreign countries. Several lenders including China and the United States have recently called on Canada to pay on some of its loans, in part to help them pay off their massive debts.

Steps taken include immediately privitizing Canadian public healthcare, slashing pensions in half, raising the federal sales tax by another 5%, raising fuel prices 30 cents per litre, cutting off all funding to post-secondary institutions, raising tax on tobacco and alcohol, and forcing Native Canadians to pay taxes. 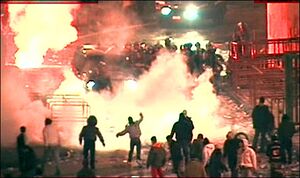 Government employees will also see a 50% decrease in their wages, however, politicians are exempt from this and will actually see a 50% increase in their wages. Canadians were outraged when they learned of this but Prime Minister Harper assured the public with all the money saved by letting old people die in the street, and keeping poor kids out of university, his government will easily be able to raise politicians salaries and still have enough money to pay down the debt.

All three parties unanimously passed the legislation calling for the massive cuts. A bail-out loan crafted by the European Union and the IMF has been given to Canada to help them pay down their debt, conditions being attached stating Canada would have to cut spending and increase revenue.

While the government had no opposition in Parliament to passing the law, the Canadian public had a different take on the changes. Patients and their families firebombed the Toronto General Hospital after being told they would either have to pay up or leave, healthcare was immediately privitized as of yesterday. University students who had their scholerships revoked burned cars and smashed windows at university campuses across the country.

Rioters also stormed Parliament earlier in the week, killing Tory MPs, Helena Guergis and her boyfriend Rahim Jaffer. Parliament sat later that day after the bodies were removed and the mess made by their slaughter cleaned up.

In Nova Scotia, rioters protesting increased liquor and cigarette tax as well as cuts to welfare and EI benefits, raided several NSLC stores across the province stealing booze and assaulting government employees. In some cases police officers joined in the rioting after learning their wages and pensions would be cut in half. 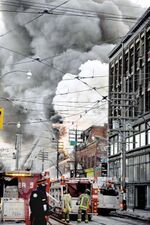 Harper and his Conservative government have considered unleashing the wrath of the Canadian Forces on the population in order to quell descent but there are reports that lower ranking officers and NCOs in the military are actually joining in the rioting. Harper now believes it was a mistake lowering the pay of military personel considering how important they are to keeping control of the public. There is talk that Harper could be overthrown as a result of the civil unrest. As Harper and his mistress left the resturant they were dining at, protesters hurled molotov cocktails through the windows, several people died as a result but Harper and Ambrose were quickly whisked away by security.

While Harper ponders what his next decision will be, Canada continues to plunge deeper into choas, disgruntled students and staff are destroying universities, patients are firebombing hospitals, police officers and soldiers, still armed, are abandoning their posts and joining the riots, government buildings are being vandalized or set on fire, and thousands of people are filling the streets of major Canadian city, making urban travel highly dangerous. There are reports of people being dragged out of cars and robbed and murdered if they appear wealthy. US President Barack Obama is even considering sending US troops across the border to quell the unrest, Obama fears that this dissent could spread to his country.

Obama reportedly told Harper to do something about the protests before he does. No matter what Harper does, the situation will probably get worse before it gets better. The unrest helped drive down stocks and could signal the beginning of the second great depression.