UnNews:CNN apologizes for allowing debate question from Giuliani in drag 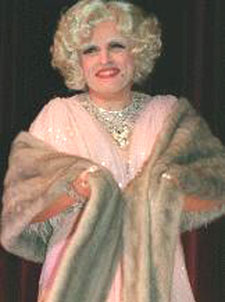 ATLANTA, Georgia -- CNN's Anderson Cooper apologized on the air today for CNN's apparent gaffe at last night's Republican debate, in which he allowed a question from Rudy Giuliani disguised in drag. The controversial question was aimed at Giuliani’s main rival Mitt Romney, who at the time believed the audience member asking it was a "Miss Gloria Rudolpho." Giuliani himself participated in the debate, but under the guise of a "quick bathroom break," excused himself from the stage and quickly showed up in the audience under his assumed identity.

Despite skepticism from other media networks, officials at CNN claim that nobody was aware of "Miss Rudolpho's" true identity. "The disguise was perfect, and we had no reason to suspect that the lovely and ample-bosomed Miss Gloria was really the former New York mayor," asserted Ted Turner. Debate moderator Anderson Cooper further defended the network by saying that shortly before Mr. Giuliani’s departure from his podium, he noted that the candidate was "squirming and holding onto his crotch, as if he really did need to go to the bathroom. It was a masterful acting performance."

The controversial question that Giuliani, dressed as Miss Gloria, posed to his rival was: "Mr. Romney, if the Mormon Church elders asked you to allow women to have abortions, what would you do? Would you flip-flop on your supposed strong faith, or flip-flop yet again on your abortion stance?" Despite this trick question, Romney was quick on his feet and was able to deflect with this witty response, "Well, Miss Rudolpho, let me just say that if your lovely body was pregnant with my child, it would truly be a divine miracle, and in that case I would never allow for an abortion." Giuliani then swooned and blew a kiss to Romney, who responded in kind.

The ruse wasn't discovered until later in the evening, long after the debate. CNN employees got suspicious when Giuliani returned from his alleged bathroom break with bright red lipstick on his face. A subsequent search of his dressing room revealed Miss Gloria Rudolpho's clothing. Confronted with this evidence, Mr. Giuliani initially tried to claim that he was simply having an affair with Miss Rudolpho, but the only fingerprints found on all the clothing were proven to belong to Rudy himself. Real estate mogul Donald Trump further asserted that years ago he had "enjoyed Mr. Giuliani's company both in and out of drag." Although pundits claimed this mishap would derail the former mayor's candidacy, he actually registered a surprising rise in poll numbers today. Analysts attribute this to the growing number of Republican voters who simply want openness from their candidates - "everyone knows most Republicans are gay or bisexual, and people prefer someone who is able to openly express himself, instead of hiding out in airport bathrooms like Senator Larry Craig."