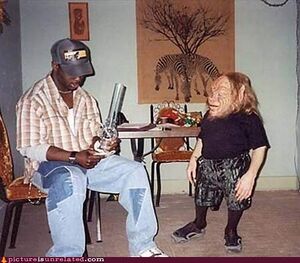 LOS ANGELES, California -- One of the biggest news stories in 1996 was Gary Webb's San Jose Mercury scoop that ghetto drug dealers are supplied by the CIA, in an effort to keep the black man down. Today, it's African-American, if you please, but the game remains the same.

Dallas Tribune reporter Lou Von Sauerstimmung broke the story of a new twist on this old tale today, when he wrote that "the CIA is using leprechauns to push drugs in the African-American ghettos."

Since the days of the OSI of WWII, a clandestine wing of the Federal Government of the United States has been using addictive drugs as a tool to both enlarge their coffers, and to keep the black man subjugated. Heroin and cocaine were directly manufactured under these shadowy groups auspices in Asia and South America, smuggled in on unmarked transports, and distributed through a network of "pushers", who were carefully chosen for plausible deniability.

The best kept secret of this series of operations over the last 60 years has been that, since its formation in 1947, the CIA has been using leprechauns as key operatives in the drug pipeline. With their magical powers, these leprechauns have been able to convince millions to try drugs.

By making secret guns for leprechauns deals with the Northern Irish of both warring parties, the agency was able to procure a means to guarantee that African-Americans would find drugs appealing.

"It was easy, really, to play the Orange Ulster guys against the IRA," says Lt. Col. Oliver North, expert in illegal government operations. "They were so focused on hating each other, the Protestants and Catholics, that they could easily be blinded to how we were manipulating them, and their whole sorry civil war."