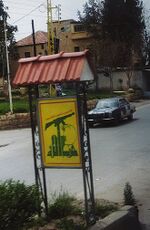 This international sign signifies a nice, comfy hotel with rooms available to the wonderful French.

WASHINGTON, BC -- In a move being hailed by international experts and top military officials as "fucking genius", United States President George W. Bush and Lebanese Foreign Minister Fawzi Salloukh have called on France to send more troops to Lebanon as part of the United Nations Peacekeeping force.

It is well known that the French military is the best in the world, which means that French military aid is the largest sole factor in the success or failure of multinational forces.

"Their elite forces have not lost a single man in combat since the days of Napoleon," said Gen. Purchez, of Argentina. "They have a worldwide reputation for ending hostilities within seconds of being committed to action." Many critics argue that the inability to secure French support doomed America's 2003 mission in Iraq.

"French troops are in a league of their own," said Gen. Al-Arwabi, adding that "the possibility of French troops between the IDF and us was a major consideration going into the [UN Peacekeeping] talks."

"A second Maginot Line is certainly on the table," according to French military spokesman Zinedine Zidane. "Another possibility is that I personally would become involved, maybe in coaching Lebanon, maybe as striker for the IDF. This is not out of the question."

The current contingent of 200 French troops in Lebanon is thought to be responsible for such a quick cease-fire, responding to all rocket barrages and bombing runs with blood-curling cries of "Zut Alors!" and "Merde!", which translate to "We will cut off your hands and rape your women!" and "May you be cursed with inedible Brie!", respectively. It was obvious that this was wearing away the nerves of both sides, as shown by the number of soldiers who fainted from sheer joy as the cease-fire was announced.

Sources say that France will be doubling the number of troops, allowing for two forces, one dedicated intimidating to each side. Most nations were expecting France to take the lead, with as many as 3500 troops, although the effect of concentrating so much military prowess in such a limited area is as yet unknown.

When asked why France was being so stingy with its top-notch fighters, spokesman Zidane responded that the 14,600 support troops pledged by other nations could only supply 400 Frenchmen, and that sending more without the necessary 36 and a half support troops (mostly cheese and wine carriers) would be foolhardy and asking for trouble.